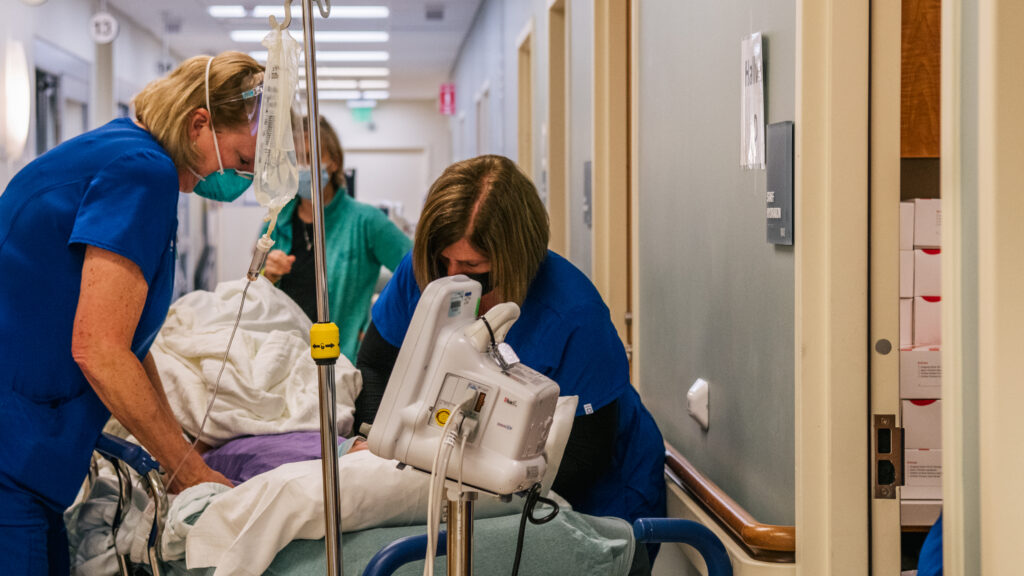 As the literal and figurative front door to many hospitals, the emergency department can offer a glimpse into hospitals’ future. And that future, in a word, is gridlock.

Visits to emergency departments have been rising faster than population growth for more than a decade, and now number 150 million per year. Over this same period, inpatient capacity has decreased by 27%

Emergency care has been in trouble for some time. In 2007, the Institute of Medicine’s report, “Hospital-Based Emergency Care: At the Breaking Point,” reported that 90% of emergency departments noted extreme stress at some time during a year.

While some of this arises from inefficient internal operations, the most common reason for overcrowding is the inability to move emergency patients to a bed in the hospital because there are no empty beds to send them to. Covid-19 didn’t create this overcrowding, as this problem has been going on for more than a decade, but it has certainly complicated the situation.

Mrs. J wanted a blanket in the emergency department. Saying no chips away at my soul

The first baby boomers reached 75 years of age in 2021. Since the number of births increased every year from 1946 to 1964, with the biggest spike in the late 1950s, the number of people turning 75 won’t peak until 2039. Added to this is that the life expectancy of these individuals is longer than their predecessors — about one-third of all women alive now will live to age 90 or beyond, meaning this group will be in the age 75-plus bracket for at least 15 years.

A recent article on the emergency physician workforce projected an increase in emergency department visits due to the growth of the U.S. population, especially the growth among those over 75 years of age.

While the above trends are well-known, these predictions and the discussions surrounding them have been too narrow in their view of demand for hospital services, neglecting what “demand” really means in this sphere.

Older patients are also more likely to be admitted to the hospital.

How technology is changing the face of medicine

This collection of stories lays out the most pressing issues in health care that tech could help solve, the exciting new ideas to make that happen, and the barriers to pulling them off.

The same phenomena are duplicated on the inpatient side. Older patients tend to be sicker and require more attention; longer stays reduce capacity. One Massachusetts hospital recently noted that the length of stay on the hospital wards had increased by almost one full day, resulting in an overall reduction in capacity of about 15%. At a six-day length of stay, one bed can accommodate 60 patients a year; at a seven-day length of stay it can accommodate only 52 patients a year.

These blocks reverberate in two directions for hospitals: On the input end, hospitals may need to transfer emergency patients who need to be admitted to the hospital but cannot because there is no space for them. On the output end, more older patients cannot go home after their needs have been addressed in the hospital because they may need rehabilitation or nursing home care, but these facilities are already full or have insufficient skilled staff — or both — to care for them.

Hotel operators have known for a long time that they cannot operate at 100% occupancy. There is no “flex time” related to getting people in and out, with a figure of about 94% being the max. Hospitals today commonly have rates of 100% or more.

Unless the capacity of emergency departments and their hospitals is expanded, the number of patients being cared for in ED hallways (known as boarders) and in hospital ward hallways (the relatively new practice of ED boarders initially being cared for in beds lining the hallways of in-patient units) will inevitably grow. Hovering over this practice is a body of high-quality research that demonstrates that the care hallway patients receive is subpar. Some of the reasons are obvious, like deficiencies in monitoring patients’ status and treatments, along with severe declines in patient experience, such as something as basic as toileting. Others aren’t as obvious, such as patients in hallway beds not receiving the thorough exams they need and delays in creating care plans for their inpatient stays.

Space planning is extraordinarily complex. If an emergency department or hospital ward is planned to accommodate X patients cared for by Y staff, and there are more than X patients, where do the additional staff members work? The medication prep area now has more people trying to get medications at the same time and waiting for access to the computer to log in the medications. People in beds in the hallway violate basic fire and safety regulations. And it’s essential to ask, “How many patients can a care team properly care for at the same time?”

There is a maximum above which performance declines — and with it morale.

Research several colleagues and I conducted showed that ameliorating overcrowding trends in emergency departments and hospitals will require a 90% expansion of ED capacity by 2050, and 72% more space for in-patient beds. Although birth rates have been falling of late, immigration is above the expectations of demographers, making it likely that there will not be a surplus of beds after the influx of baby boomers to emergency departments and hospitals has peaked in 2040.

Building new or expanded emergency departments won’t solve the overcrowding problem unless inpatient capacity is also expanded. The time lapse between the decision to build new capacity and that capacity being available is five years, and the pre-Covid cost for such expansion was about $1 million per bed for both emergency and in-patient beds. That cost is higher today: New facilities would be subject to expensive design enhancements, such as those for managing infectious diseases, and cost spikes for commodities and equipment have made construction more expensive.

Care at home under a hospital’s direction is a new model being evaluated now in small programs. It has many attractive features but is inefficient in some respects — for instance, nurse visits per day are few compared to what nurses can do when patients are aggregated.

Some emergency departments have been successful in identifying patients who require more testing before discharge and, instead of admitting them to the hospital, care for them in observation units for less than 24 hours. There may be a cohort of patients whose care lies between emergency observation and full admission.

It is possible that community-level hospitals could expand into new facilities that are simpler and cheaper to build and can come online quicker, but this expansion could account for perhaps 25% of the patients banging on the doors to get beds in existing facilities.

Tent hospitals might be another option. These are usually constructed on hospital grounds, but have also been erected in arenas. Such basic models could be morphed into permanent buildings that are cheaper and can be built more quickly than traditional hospitals. In the early days of the Covid-19 pandemic, for example, China built two hospitals with more than 500 beds in 10 days. These were of basic functionality to handle epidemics, but could be models for future expansion of U.S. emergency and hospital capacity.

Expanding the physical capacity of emergency departments and hospitals would, of course, require more caregivers. Any plan should, then, include workforce development. This may be even more challenging than planning for physical capacity, with looming shortages of physicians, nurses, and other health care workers before the pandemic emerged and the fact that health care careers are less attractive now than they were two years ago.

No one wants to be cared for in the hallway of an emergency department or hospital, and hospital staff don’t want to deliver care they know is inferior. The case for facility expansion is unarguable — and the discussion as to how this is conceived, built, and operated should have been a “day 1” priority.

Every individual who plays an oversight role in local health should be obliged to spend 12 hours in an emergency department in their jurisdiction from 3 p.m. until 3 a.m., and while doing so picture parents on gurneys in the hallway not for hours, but for days.