In a huge victory for Dems, Medicare poised to negotiate drug prices 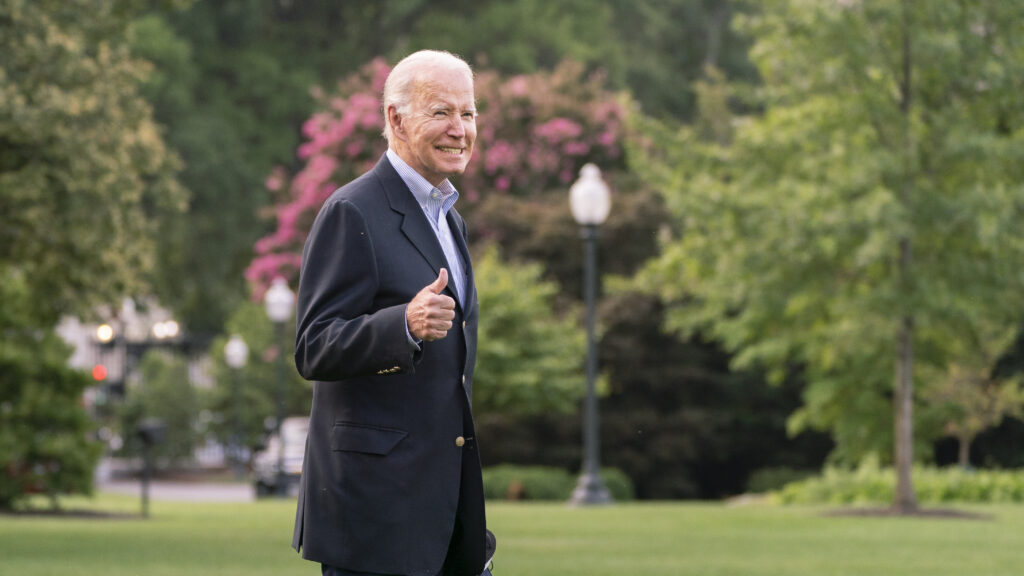 WASHINGTON — President Biden is on the verge of his own crowning health care achievement to call, in his words, a BFD.

After two decades, Democrats are finally on track to break the firewall between the pharmaceutical industry and the Medicare program. Soon, the U.S. government will be able to use the full brunt of its leverage to negotiate discounts from drugmakers, like the governments in many other high-income countries.

Biden owes the win to dogged dedication by both Senate Majority Leader Chuck Schumer and House Speaker Nancy Pelosi, who each in separate instances resurrected drug pricing reform of the package from what appeared to be certain death. Schumer’s ultimate win came Sunday, when the Senate squeezed through a sweeping package that includes climate and tax reforms in addition to the historic win on letting Medicare negotiate drugs. The House is expected to pass it after the House returns to Washington on Friday, after which Biden can sign it into law.

The reform is a stunning defeat for the pharmaceutical industry, which has invested a staggering amount of money to get its way in Washington, and which launched a seven-figure campaign last month to try to stop this effort. Allowing Medicare to negotiate drug prices has been the sector’s third rail for two decades. While drug makers’ influence watered down the proposal, even the good will they earned after developing highly effective vaccines to treat Covid-19 wasn’t enough to stop it.

Implementing Medicare’s new negotiating power will be a contentious experiment. Drug makers have tremendous resources to deploy and three years before any of the provisions would take effect — time they can use to try to bend the regulatory process to their will. How the new policy will change the complex dynamic of investors’ decisions, pharmaceutical companies’ calculations, and the outlook for generic drugs is still unclear. So is the way policymakers will grapple in the future with those patients the package leaves behind.

But for some adults 65 or older who take expensive medicines, the policy capping annual out-of-pocket costs at $2,000 will be life-changing. And progressives hoping for more aggressive see the win as a door cracked open to more aggressive reform.

“To seniors who’ve faced the indignity of rationing medications or skipping them altogether, this bill is for you,” Schumer declared on the Senate floor after the bill’s passage.

President Clinton’s failed pharmacy benefit proposal in Medicare would have given mandatory discounts to the government. President Obama gave up his own ambitions in the space, choosing instead to cut a deal with the pharmaceutical industry to earn its support for the Affordable Care Act. Even President Trump blustered about drug prices for years without doing much of anything to lower them.

Now Democrats have a major political victory to campaign on ahead of the midterm elections. Senators on the floor Sunday afternoon slapped each other’s backs, hugged, and shook hands in celebration after well over a year of intense negotiations.

It doesn’t affect every voter, as the reforms are mostly limited to adults over 65. The chamber’s rules referee decided that two provisions Democrats had hoped to include that would have controlled drug costs for people who get insurance through their jobs didn’t adhere to the Senate’s rules. Even the way Medicare will negotiates drugs is limited: in its first year, it will only apply to 10 costly drugs that have been on the market for several years and don’t have any competition.

Despite all the things going for drug pricing reform — it’s enormously popular, it saves the federal government a whole lot of money, and Democrats had been promising action for years — the path to the Senate’s sign-off was rocky and had more than one near-death encounter after rebellions from moderates and lobbying by the drug industry.

The package is also a win for patient advocates who were dramatically outspent by drug makers, and watched one reform bill after another die for years. The bill doesn’t do as much as progressives had hoped, particularly for uninsured patients, but they ultimately decided that something was better than nothing.

“Make no mistake, this legislation is game changing,” said David Mitchell, a multiple myeloma patient who founded the patient advocacy group Patients for Affordable Drugs. “It marks a shift to reforming the system in order to make it work for the people it is supposed to serve – rather than the people who profit from it.”

The changes will be most impactful for seniors who pay for expensive medicines, as it will cap their out-of-pocket costs at $2,000 per year. There’s no limit right now, and 1.2 million seniors paid more than $2,000 per year in 2019, according to a Kaiser Family Foundation analysis. One study published in Health Affairs in April found that seniors in Medicare didn’t fill new prescriptions for costly drugs to treat cancer, hepatitis C, and immune system disorders and high cholesterol 39% of the time.

AARP, which took on the pharmaceutical industry and advocated for aggressive drug pricing reform in key moments, celebrated the package’s passage as “historic.”

“We have been working for nearly two decades to allow Medicare to negotiate the price it pays for medications,” AARP CEO Jo Ann Jenkins said. “This bill will save Medicare hundreds of billions of dollars and give seniors peace of mind knowing there is an annual limit on what they must pay out-of-pocket for medications.”

“Today’s vote may feel like a political win for Democrats, but it’s really a tragic loss for patients,” PhRMA CEO Steve Ubl said.

Democrats’ reform is a stinging rebuke to a pharmaceutical industry that is accustomed to winning in Washington. The industry has a brute lobbying force matched by few other groups, a sophisticated campaign finance strategy, and a wide network of contract lobbyists and affiliated groups willing to do its bidding.

Even a last-minute lobbying sprint hasn’t been enough to stop the package from moving forward. Drug makers launched a seven-figure ad buy, deployed executives to Capitol Hill, and funneled campaign contributions to pharma-friendly senators, but ultimately Democrats have held their caucus together.

The pharmaceutical industry argues that the negotiation process has boundaries that make the process more like price setting, that it does nothing to help patients with private insurance, that it doesn’t address the role of middlemen in pricing dynamics,

“Unfortunately the bill at final passage remains bereft of any provisions that systematically and holistically tackle the biggest drivers of out-of-pocket costs in our system,” said Michelle McMurry-Heath, president and CEO of the brand biologic lobby BIO.

Not every company will be affected equally by the policies in Democrats’ reform package, and it’s also unclear exactly which drugs Medicare will choose to negotiate for first. An analysis by SVB Securities highlighted drugs made by AstraZeneca, GSK, Eli Lilly, and Novo Nordisk as potential candidates for negotiation the first year, when 10 drugs will be chosen.

Drug makers have sounded the alarm in an unusual way to investors in recent weeks. Several companies including Eli Lilly, Pfizer, Johnson & Johnson, Bristol Myers Squibb, and AstraZeneca have told investors that the Medicare negotiation policy in particular will change how investors deploy capital and will hurt innovation in some disease areas.

Generic and biosimilar makers also fear that the negotiation process will replace the function of generic drugs and biosimilars, and will discourage investment because of uncertainty about which drugs would have negotiated prices. Congressional budget analysts didn’t estimate the legislation’s effect on the generics market. Association for Accessible Medicines President and CEO Dan Leonard said access to generic drugs is important to patients who aren’t on Medicare, and who won’t have access to the negotiated prices.

Ipsita Smolinski, founder and managing director of the consulting firm Capitol Street, said the Medicare negotiation provision could prompt changes in how companies invest their research dollars and could prompt mergers if companies want to diversify their portfolios.

“It felt like it took a while for the markets to realize that it’s going to be impactful,” Smolinski said.

Nor is the fight entirely over. Ubl, the PhRMA president, issued a bald-faced threat last week that the industry could sue to block the law, and claimed that Democrats who supported the bill would pay politically.

The battle over which therapies should be chosen will also be a regulatory lobbying frenzy, and drug makers have until 2026 to bend the policy to their will.

Much can change in three years, including control of Congress and the White House. Democrats tweaked their bill to ensure that administrations less enthusiastic about negotiation will still have to move the policy forward, but regulators have some flexibility to interpret legislation their own way.

Just as drug makers have found ways to use patents to stave off competition, it’s possible they will craft ways to circumvent the negotiation process, too.

One analysis by Evercore ISI senior managing director Umer Raffat suggested that brand drug makers could simply reach settlement agreements that limit competitors’ volume to avoid the negotiation process. Congressional budget analysts also expect that launch prices may be higher than they would otherwise, a strategy that would let drugmakers make more money in the first years’ of a drug’s launch to make up for any lower revenues later.

Even though it will be a few years before patients see negotiated prices in Medicare, the regulatory process will begin soon after the House passes the bill. Drug makers will face penalties for hiking the price of pharmacy drugs starting in October, and rulemaking for other provisions will be a mammoth undertaking. Medicare and Medicaid chief Chiquita Brooks-LaSure said that her agency is ready to implement the legislation when it becomes law.

Is It Too Late To Stop The Outbreak?

Is It Too Late To Stop The Outbreak?