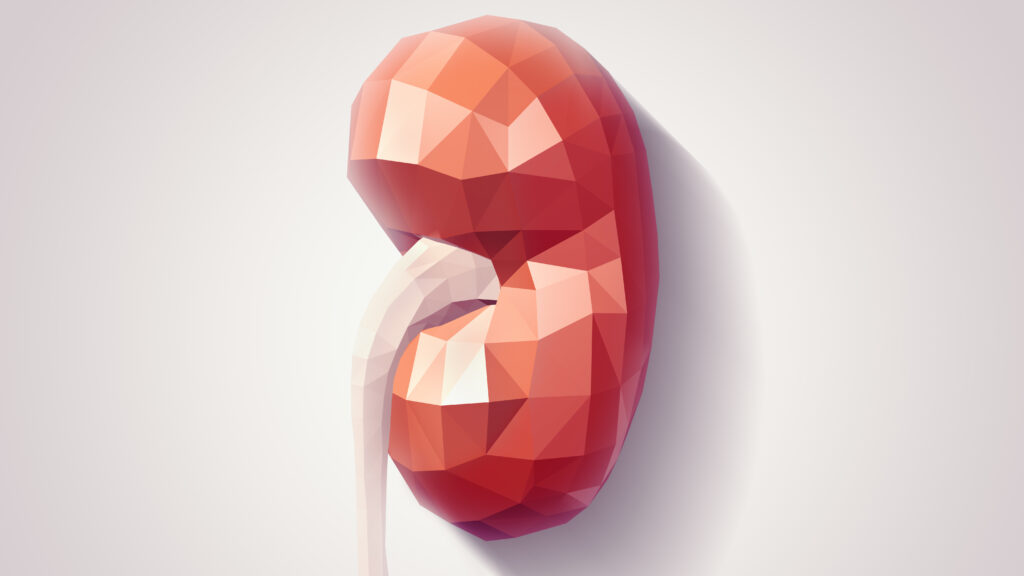 A drug that has been used to slow progression of kidney and cardiovascular disease in people with type 2 diabetes may also help people with chronic kidney disease who do not have diabetes, according to findings published Monday in the European Heart Journal. Aldosterone, a hormone produced by the triangular adrenal glands, might be the key target.

In the observational study, researchers analyzed health data from 3,680 people with chronic kidney disease for nearly 10 years. Those with elevated levels of aldosterone, a crucial, salt-conserving hormone made by the adrenal glands, which sit atop the kidneys, had a higher risk of serious kidney disease progression during the study period: they are more likely to lose half their kidney function, start dialysis, or develop end-stage kidney disease.

That finding troubled Ashish Verma, a kidney specialist and assistant professor of medicine at Boston University School of Medicine, and lead author of the study. Elevated aldosterone levels are common in the general population but often fly under the radar, even in people at high risk of developing chronic kidney disease, Verma told STAT.

Finerenone is a nonsteroidal drug approved by the FDA for people with type 2 diabetes and chronic kidney disease. It could also help prevent kidney disease or its progression in people without diabetes, with a lower risk of causing dangerously high potassium levels than traditional therapies like spironolactone or eplerenone, Verma said.

STAT spoke to Verma via Zoom ahead of the paper’s publication. The interview has been edited for clarity and brevity.

What is the relationship between aldosterone and kidney function?

Aldosterone is a hormone made by the adrenal glands that helps the body conserve water and salt. Take, for example, somebody who is dehydrated or has very low blood pressure. This hormone actually helps conserve water and salt. But if this hormone is, all the time, at a higher concentration in the body, it leads to hypertension (high blood pressure). And that can lead to damage in the kidney and in the heart.

Why did you decide to study aldosterone’s role in chronic kidney disease?

There were very recent, very big randomized controlled trials, published in the New England Journal of Medicine – FIDELIO and FIGARO. And they used finerenone. Aldosterone acts on mineralocorticoid receptors, which finerenone blocks. They found drastic results in patients with diabetic kidney disease who have protein in the urine, which is abnormal, and who have low kidney function.

So those patients actually benefited from finerenone — their kidney disease progression halted. But those patients had diabetes. I wanted to link the mechanism: Why this drug is helpful. And the other question I had was, “Wait a second. Is high aldosterone only bad in people with diabetes? Or is it also bad in people do not have diabetes?”

What did you find?

What is known about how finerenone or similar drugs might work in people without diabetes who have chronic kidney disease?

Older drugs, like spironolactone or eplerenone, can cause very high potassium levels in people with low kidney function (which can lead to life-threatening heart problems). So people feared always using it. And even in my clinic, if I use these drugs on patients, I test their potassium and make sure their potassium stays okay. That was one of the hindrances for using these drugs.

But now, with more evidence in front of us that high aldosterone concentration is bad, doctors should also be checking aldosterone levels in people with diabetes, people with resistant hypertension (high blood pressure that doesn’t respond to three or more antihypertensive drugs, including a diuretic) or people with central obesity. Dr. [Anand] Vaidya, co-author of this study, showed in his previous publication that excess aldosterone is very common in normal populations, but we don’t check for it, so it’s a very unrecognized disease in the general population.

Why don’t doctors regularly check aldosterone levels? Is it difficult to do?

No, it’s not difficult. It’s a very easy task that can be done in any clinic, anywhere in this country. The problem is that there are set guidelines for checking aldosterone. We check for it in people who have resistant hypertension, people who are young and have high blood pressure. But as new reports show that high aldosterone is common, I think physicians should be more motivated to check these levels in patients.

What surprised you throughout the research process?

What do you think is the biggest contribution of this research to the scientific literature and to the understanding of kidney disease?

This is the first study to show that high aldosterone is associated with kidney disease progression. No study before has shown it. There was a study using the same cohort but less follow-up time. And they used different methods. We used different methods because we removed people who were on aldosterone antagonists like spironolactone and eplerenone. We had nine years, almost 10 years, of follow-up, with 1,412 kidney events.

What new questions do these findings prompt for you?

The most important thing is why low GFR leads to high aldosterone. Why do people with chronic kidney disease have higher aldosterone? Why this happens, we don’t know, which is very important to find out. And another thing, which is fascinating to me, and I’m going to work on it in the future, is that in humans, we always postulate through animal models that high aldosterone actually leads to fibrosis in the heart and in the kidney. But nobody actually measured these markers in humans to see how it actually happens.

Are you applying any of these findings to your clinical practice?

I’m actually checking aldosterone in a lot of patients I see that have high risk, like obese patients, and patients with resistant hypertension. And I’m trying to put them on spironolactone to see. In Boston Medical Center, we don’t have finerenone yet because it’s a costly drug. I think when finerenone comes to the market, I’m going to start putting people on finerenone and see if it reduces their aldosterone levels.

Keeping Your Laundry Free From Monkeypox