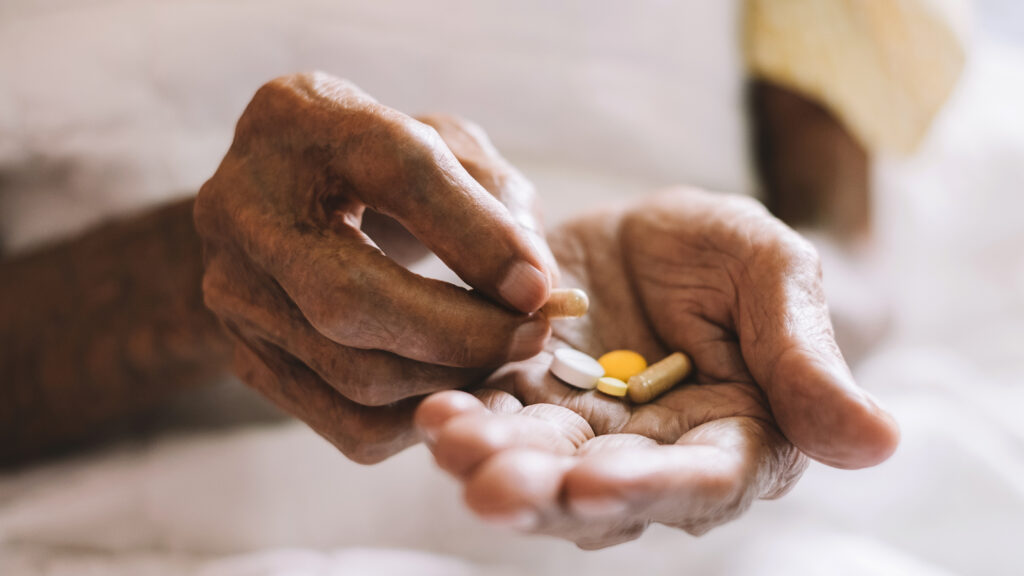 The plan, which cleared a major hurdle Sunday when the Senate very narrowly approved it, has four major policies — it would allow Medicare to negotiate prices for some costly drugs, penalize drugmakers for hiking prices faster than inflation, redesign Medicare’s prescription drug benefit and cap annual costs at $2,000, and cap Medicare patients’ insulin costs at $35 per month.

Those changes won’t take effect right away. Most wouldn’t take effect until 2024; negotiated drug prices won’t be in place till 2026. The cap on insulin costs comes a little sooner, in 2023. And drugmakers that hike their prices would face penalties starting in October.

Democrats’ drug pricing reforms also won’t help as many people as they had originally hoped, as two major provisions that would have affected people who get insurance through their jobs ran afoul of Senate rules.

That means most of the patients who will directly benefit from the policy are adults 65 and older who are in the Medicare program. STAT has compiled a list of the categories of patients who are most likely to see benefits at the pharmacy counter.

There’s one big variable to keep in mind — insurance premiums. At least for a little while, as Medicare’s benefits get more generous and more patients can afford drugs, spending may go up.

“The premium effect is really difficult to predict, almost more difficult than the effect on drug prices,” said Juliette Cubanski, the deputy director of Medicare at the Kaiser Family Foundation.

The legislation would cap premium increases at 6% per year through 2029 to help decrease the impact, but it’s possible in the short-term that some beneficiaries could pay more for premiums than they would save.

None of the policies in Democrats’ package would directly affect people who get insurance through their jobs, or through Affordable Care Act marketplaces. There’s a raging debate over whether the pharmaceutical industry will charge these patients more to make up for lost money, or whether cost controls in Medicare could set a precedent for other insurers to demand lower prices, as well.

It seems counterintuitive, but Medicaid programs could actually have higher costs too if drugmakers raise their prices more slowly, according to congressional budget analysts. If that trend continues, it will cause states to have to make choices to work around the financial hit.

Medicare patients who pay a lot for drugs

The most obvious benefit is in the part of Medicare that covers drugs sold in pharmacies, Part D, where the reform package would cap patients’ annual out-of-pocket costs at $2,000 and spread them throughout the year, starting in 2024.

There are differing estimates of how many people could benefit from the cap.

Kaiser Family Foundation analysts found that 1.4 million people with traditional Medicare benefits spent $2,000 or more in 2020. An estimate co-authored by Sean Dickson, director of health policy at the West Health Policy Center, found that if a $2,000 out-of-pocket cap had been instituted in 2021, at least 3.1 million patients would have seen savings.

While many older adults may not spend more than $2,000 per year on their drugs right now, the new annual cost protections ensure financial protections for the future, said Vanderbilt University associate professor of health policy Stacie Dusetzina.

“People should be really excited. Medicare Part D has been an incredibly beneficial program for older adults, [and it] does not work for people who need expensive drugs,” Dusetzina said.

It’s unclear whether patients who take drugs that Medicare ultimately negotiates starting in 2026 will save money simply because of the negotiation.

They’re likely to be expensive, so it’s possible folks will still hit that $2,000 cap anyway. But if not, patients would likely end up paying a percentage of the lower price, which could save them money on each prescription fill.

The package also includes a change to Medicare’s low-income benefits for pharmacy drugs — a provision that has flown a bit under the radar.

Starting in 2024, Democrats’ plan would allow people making up to 150% of the federal poverty level to get full benefits. That means they would have a set, low cost for each prescription instead of paying a percentage of the full price.

Around 400,000 people fell into that category in 2020, per a Kaiser Family Foundation analysis, but Dusetzina said there may be more patients out there who are eligible, but not enrolled.

“This is a really big deal because by definition, these patients are near poor but still have high cost-sharing,” Dusetzina said.

Medicare patients who use insulin

Democrats’ drug pricing plan would also force all plans in Medicare to offer insulin at a maximum of $35 per month for patients starting next year.

Medicare beneficiaries already have options to buy a plan that caps insulin costs at $35 per month, but about a quarter of Medicare patients still paid more than that in 2021, per data compiled by the the life science analytics firm IQVIA.

It’s a quick turnaround, as plans have already submitted their premium estimates for next year, but insurers have factored in that this policy could become law, West Health’s Dickson said.

This policy is the first scheduled to go into effect. The penalties would start in October for pharmacy drugs, and in January for drugs that are administered in doctors’ offices.

It’s hard to predict the future of which drugs would have seen dramatic price spikes, but similar to the annual cost protections, it allows more predictability for Medicare patients. However, half of drugs covered by Medicare took price hikes steeper than inflation in 2020, according to a Kaiser Family Foundation analysis.

Getting Young Athletes Ready for a New School Year

TPOXX Hard to Obtain Even After Monkeypox Emergency Declaration

TPOXX Hard to Obtain Even After Monkeypox Emergency Declaration

Does Cannabis Help With Menopause Symptoms?