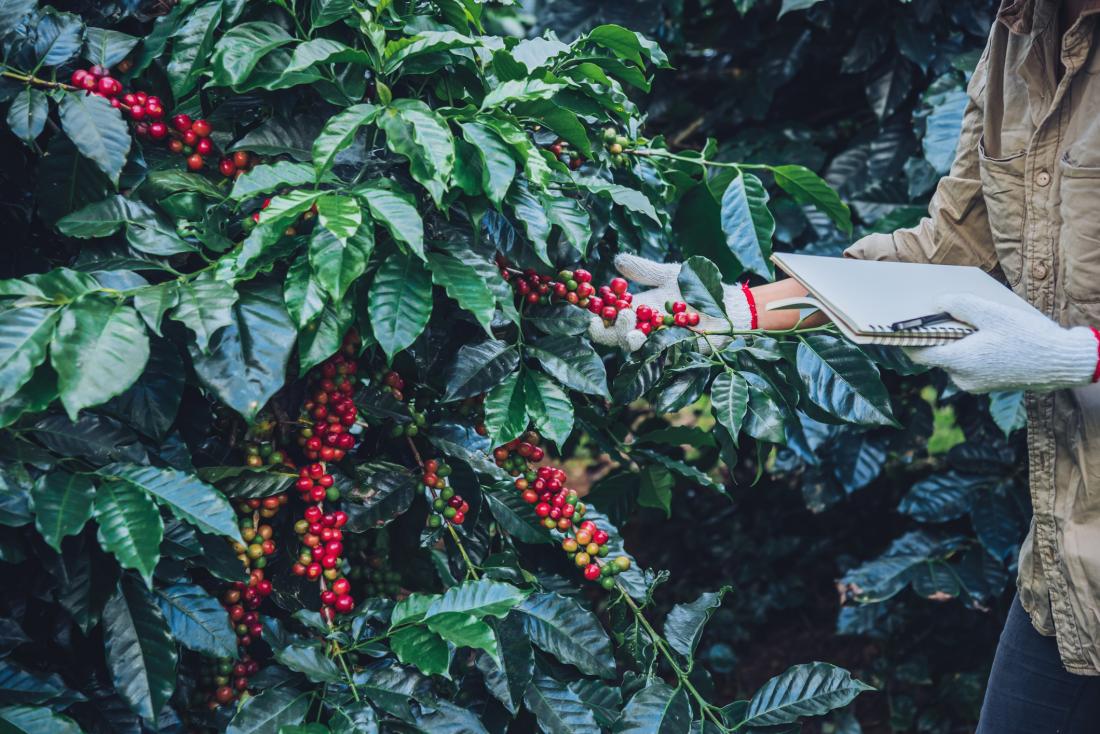 The study looks to repurpose the waste that coffee production creates.

Coffee is one of the world’s most popular drinks. To produce coffee, only the bean itself needs roasting.

To reach the bean, growers remove the husk, which is a tough outer shell, and the silverskin, which is a thin skin that covers the seed.

They tend to leave the husks, in particular, in the field.

These abandoned coffee byproducts contain chemicals such as caffeine, tannins, and chlorogenic acid, which can be hazardous to the environment.

Manufacturers produce around 0.68 tons of green coffee waste to generate 1 ton of fresh coffee, so it makes sense to find ways to repurpose these byproducts.

Now, researchers at the University of Illinois at Urbana–Champaign are investigating whether or not some of this waste could be useful for its bioactive properties.

Using extracts of silverskin and husk, the scientists investigated whether these byproducts might reduce some of the biochemical hallmarks of obesity. They also tested individual phenolic compounds extracted from silverskins.

They have now published their results in the journal Food and Chemical Toxicology.

“This material from coffee beans is interesting, mainly because of its composition. It’s been shown to be nontoxic. And these phenolics have a very high antioxidant capacity.”

Obesity is an increasingly common but complex issue: There is much more to obesity than excess fat tissue. In fact, it goes hand in hand with low grade chronic inflammation, which can lead to insulin resistance. Insulin resistance occurs when the cells of the body become less responsive to insulin.

Insulin resistance is also associated with an increase of macrophages in fat tissue. Macrophages are immune cells that detect and destroy pathogens.

The increase of macrophage numbers in adipose tissue triggers the release of chemicals that work to increase inflammation, creating a vicious cycle.

Obesity-related inflammation also appears to impact mitochondria, the fabled “powerhouses of the cell.” The resulting mitochondrial dysfunction is linked to lipid accumulation within the fat cells, which is also tied to insulin resistance.

The authors of the new study believe that if it is possible to curtail inflammation, it might derail the interlinking pathways of obesity, insulin resistance, and inflammation, thereby reducing the amount of overall damage.

Using cultured cells, they set out to investigate the effects of the coffee extracts on obesity-related inflammation, mitochondrial dysfunction, insulin resistance, and adipogenesis. This is the formation of fat cells from precursor cells.

The scientists cultured the fat cells and macrophages together to simulate “real life” interactions between the cells. Lead study author Miguel Rebollo-Hernanz explains what they found.

“We evaluated two extracts and five pure phenolics, and we observed that these phenolics, mainly protocatechuic acid and gallic acid, were able to block this fat accumulation in adipocytes mainly by stimulating lipolysis, but also by generating ‘brown-like’ or ‘beige’ adipocytes.”

Brown-like adipocytes contain large numbers of mitochondria and burn fat. Rebollo-Hernanz adds, “We saw that these phenolics were able to reduce and decrease the secretion of inflammatory factors, but also decrease oxidative stress.”

“Now we know that in the presence of these compounds, we can reduce inflammation, reduce adipogenesis, and decrease the ‘loop’ that helps the two types of cells grow and develop bad compounds that will negatively affect the whole system.”

In this study, the researchers used cell cultures. Although this is where much of medical research begins, it is a long path between here and creating a usable intervention.

Another issue, as the authors explain, is that the body is likely to break down phenolic compounds before they can reach adipose tissue.

Using coffee byproducts to benefit health might also benefit the environment, so the idea is worth pursuing.

Once the coffee producers see the value, explains Prof. de Mejia, “they will treat these materials as an ingredient instead of a waste.”

“It will require good collaboration between academic institutions, industry, and the public sector to solve this problem, but the market is there for these products.”