Although chickenpox often clears up on its own, it can cause serious symptoms in babies, especially newborns. Therefore, unvaccinated babies should not be in close proximity to people with the virus.

The telltale sign of chickenpox is a crusty, itchy rash. The rash is red, and it usually starts on the face, neck, or chest before spreading to other areas of the body. The rash starts with fluid filled blisters, which crust over within 4–10 days.

If an infant scratches the blisters, they may ooze or become infected.

Some other signs and symptoms of chickenpox in babies include:

Newborns with chickenpox may not have a fever because they have a less developed immune system, and, therefore, their body does not always respond to infection by raising its temperature.

Chickenpox does not usually cause stomach problems, such as diarrhea, or respiratory symptoms, such as a stuffy nose or congestion. Infants with these symptoms may have a different virus.

Parents and caregivers should consult a doctor if a baby under 3 months of age shows signs of chickenpox or develops a fever.

In most children, chickenpox symptoms clear up on their own within about a week. Treatment focuses instead on managing symptoms. The following home remedies may provide relief:

If symptoms are very severe, or a baby has a higher risk of complications from chickenpox, a doctor may prescribe an antiviral medication. These drugs can help the baby’s body fight the infection and may reduce the severity and duration of symptoms.

In some cases, a doctor may recommend other treatments to address chickenpox complications. For example, a baby with dehydration from a high fever and inadequate liquid intake might need to receive intravenous fluids in a hospital.

The varicella-zoster virus causes chickenpox. Once a person gets the virus, they are typically immune to future infections.

Very rarely, a person with a weakened immune system may get a second infection. It is also possible for the virus to reactivate, but in most cases, reactivation of the virus causes shingles rather than chickenpox. 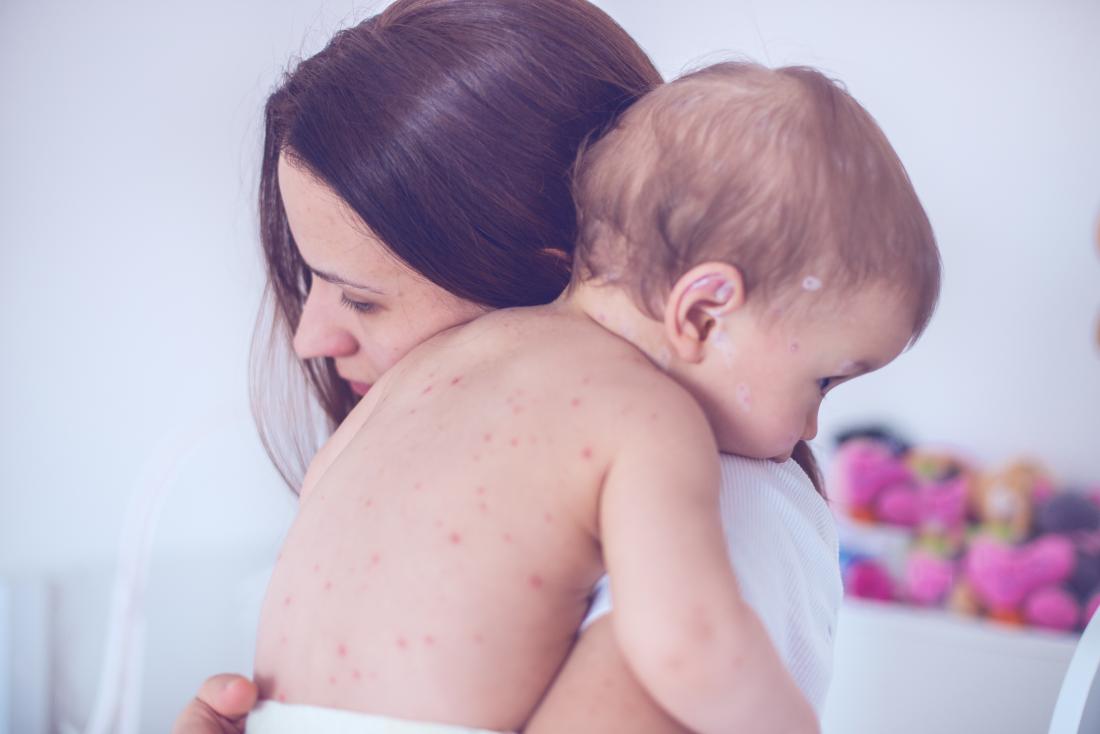 Chickenpox is highly contagious in people who have active infections.

Chickenpox lives in the respiratory tract and eyes. It is highly contagious in people who have active infections and in cases of recent exposure. A person who is not immune can get chickenpox if they come into contact with mucus, saliva, or other bodily fluids from a person with the infection.

For this reason, people with chickenpox should avoid contact with babies under the age of 1 year or older children whom healthcare professionals have not immunized against chickenpox.

People living in close quarters are particularly vulnerable, as are unvaccinated children in preschools and daycare centers. A pregnant woman with chickenpox can also transmit the virus to her newborn.

After a person who is susceptible to chickenpox comes into contact with the virus, the virus lives in their body for 10–21 days before they get sick and more obvious symptoms show. People with weak immune systems, such as newborns and those living with HIV, may have slightly longer incubation periods.

Most babies recover from chickenpox within a week, and some may even improve within a few days. However, those with very severe infections may require 2 weeks or longer to return to health.

Most people, even babies, heal from chickenpox without additional treatment. Complications are rare, but when they do occur, they can become serious. Possible complications include:

Parents and caregivers should call a doctor about chickenpox in a baby if:

Women who develop chickenpox when pregnant should also speak to a doctor.

It is important to go to the emergency room if the baby: 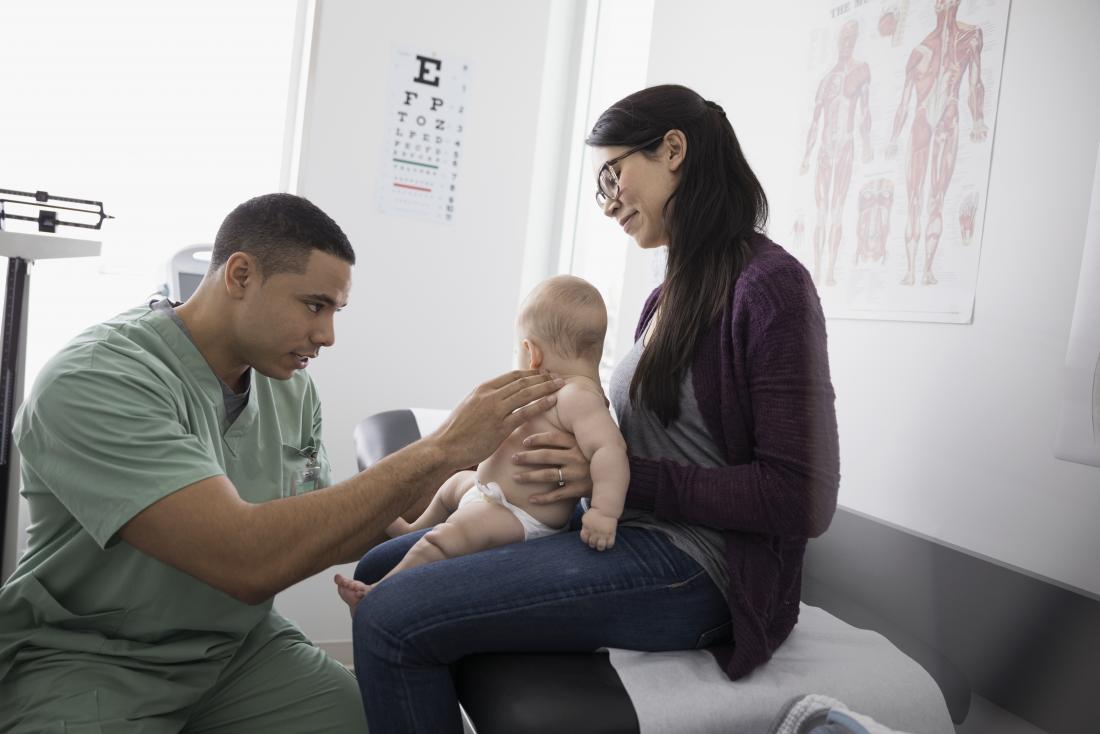 A parent or caregiver can discuss vaccination with a doctor.

The Centers for Disease Control and Prevention (CDC) recommend vaccinating babies at both 12–15 months and 4–6 years of age. A parent or caregiver who misses this vaccine schedule can still catch up and vaccinate their child.

Vaccinations can stop the spread of chickenpox and virtually eliminate the child’s risk of developing the disease. If a vaccinated child does get chickenpox, which is very uncommon, the infection is often less severe.

Some other strategies to prevent chickenpox in babies include washing children’s hands before they eat and after they play, especially if they have been playing with other children, and avoiding people with recent exposure to chickenpox.

Women who wish to try getting pregnant can ask a doctor about getting their vaccines beforehand. Healthcare professionals cannot give the chickenpox vaccine during pregnancy.

For most babies, chickenpox is mild and clears up on its own. However, it is important to be aware that chickenpox in babies is occasionally dangerous and can cause severe symptoms.

Vaccination remains the best strategy for reducing the risk of chickenpox in babies and young children. As babies under the age of 1 year do not receive a vaccine against chickenpox, the safest practice is for everyone else around them to get the vaccine. Parents and caregivers can discuss prevention and safety strategies with a healthcare professional.

If a person has concerns about a baby with chickenpox, they should contact a doctor or pediatrician for advice.