There are a lot of plants eaten for food that may also contain toxins that harm the brain and the nervous system, when present in amounts that cross the limit of individual tolerance. This happens when such toxin-containing foods are the chief or only source of nutrition.

Neurologic disease caused by food toxins is probably more common than that caused by food contamination with manmade chemicals like the infamous Minamata poisonings of a whole fishing community, or the Chinese adulteration of infant formula with melamine. Researchers say, “the adverse neurological effects of food dependency on plant components with toxic potential constitutes a significant global health issue.”

Some of these foods include unripe lychee and ackee fruits which can cause acute encephalopathy if overeaten; cassava (either the tuberous root or the leaves) or grasspea, which are linked to subacute spastic weakness of the lower limbs, and cassava root flour which can result in the inability to walk straight (ataxic neuropathy). This situation happens in chronic food scarcity, malnutrition, vitamin deficiency disorders, inadequate removal of the toxins by proper cooking practices, or in some cases, genetic predisposition to the toxin.

Lychee and ackee fruit can cause acute illness and death, while cassava and grasspea cause a slower crippling paralysis as well as other neurologic deficits.

These foods are grown and eaten in large quantities mostly in poor countries. Reliance on such foods often increases with crop failure or large-scale movement of people from their homes as in wartime. These plants grow well in drought, waterlogged soil, and survive strong winds and wildfires. Poor or dry soil can also cause higher concentrations of toxins within these foods. In such a setting they may become the primary source of nutrition, and may cause disease among a significant number of people. The amount eaten, the nutritional status, and the availability of other foods all play a role in deciding whether these foods help or harm the person.

Ackee fruit is produced by an evergreen tree native to West Africa and introduced to Jamaica following the slave trade. It is part of a Jamaican national dish. It is a delicious aromatic but sweet fruit.

Ackee fruit has been known to cause encephalopathy due to severe hypoglycemia in several parts of these regions. This illness, called Jamaican Vomiting Sickness, is related to eating unripe fruit, reusing the water used to cook the ackee arils, chronic malnutrition, and sickle cell trait which is found in a third of the people living in such areas.  Cold weather can delay ripening and is associated with a higher incidence.

The disease is caused by certain peculiar L-amino acids in the immature arils of the unripe fruit, which are found at ten times higher levels in unripe fruit. These amino acids reduce the availability of fatty acid oxidation products, thus preventing their use as fuel. These products are also required to feed the glucose manufacture chain in the body. Thus the body cannot synthesize glucose but is forced to use up the glucose already present, precipitating severe hypoglycemia.

Lychee fruit also causes fruit poisoning the same way, when eaten unripe. In areas of lychee production, outbreaks of acute encephalitis syndrome occur in the harvest seasons, when poorly fed children pounce on the fruit including the unripe ones, to wake in the morning with hypoglycemic seizures, ending in coma and death. Lychee poisoning has been reported in India, Asia, Bangladesh, Vietnam, and China.

The treatment of both lychee and ackee poisoning is to give 10% glucose solution intravenously, while also correcting the salt-water and acid-base imbalance. Untreated, the illness causes repeated vomiting and seizures followed by coma and death. 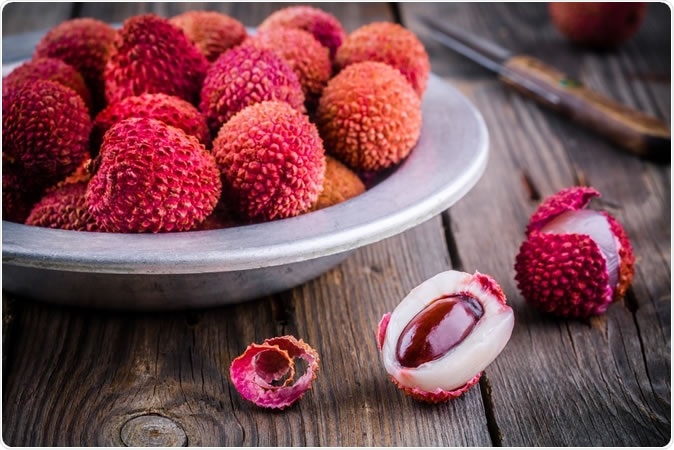 Grasspea is a legume with a high protein content, containing an excitatory toxic amino acid that causes chronic and crippling spastic paraparesis, or lathyrism. when used as a staple. The effects are greater in undernourished people and those who overexert physically. Known as far back as ancient Greece, it is now known to occur, though at low rates, among poverty-stricken populations in Bangladesh, India and the Horn of Africa. Lathyrism is more often seen in males, and is caused by an amino acid called L-BOAA that causes the degeneration of the cortical motor neurons in the lower half of the spinal cord. 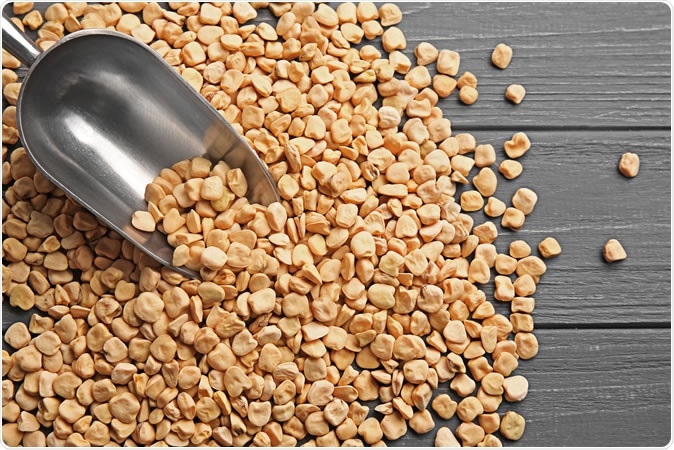 Cassava produces a starchy root tuber that can grow in dry soils, and is therefore a primary source of nutrition for poorer sections of the population in the Indian state of Kerala and in Africa. It supplies food carbohydrates for over 500 million Africans alone.

When grown under drought conditions, toxin levels increase. Some bitter varieties of this root that contain glucoside compounds that give rise to cyanic acid are responsible for cassava poisoning. In general, the root is detoxicated by soaking in water or grating it, and then heating or sun-drying it. This brings the glucoside into contact with an enzyme which breaks it down to cyanohydrins at an acidic pH, which then degrade into ketones and hydrogen cyanide gas that escapes into the air.

Cassava flour is thus produced from processed flour and is detoxicated, but in times of drought, which is when it is eaten in the largest amounts, water for such processing is unavailable, exposing the eaters to higher levels of cyanogenic compounds. These are metabolized in the body to cyanide, and later to thiocyanate. Both are toxic compounds, but cyanide more so. 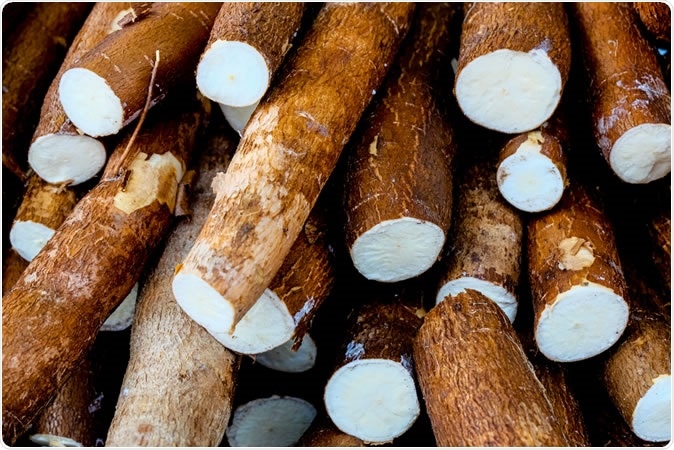 Toxic levels of cyanide can lead to poisoning and death due to inhibition of the vital mitochondrial electron transport chain, preventing tissue-level use of oxygen for respiration. Headache, dizziness, abdominal pain and vomiting may all occur, as may seizures. More than 100,000 cases of cassava poisoning have occurred in 2000 in Africa.

Chronic intake of toxin-containing cassava can cause konzo or mantakassa, which is found mostly in children and young women. It is a spastic paraparesis of rapid onset, characterized by a scissors-like configuration of the legs. It has affected up to 10% of the population in certain areas, especially during dry seasons due to the lack of sufficient water to process cassava properly, coupled with an increasing need to use cassava due to the non-availability of other food crops. There is no effective treatment.

Cassava neuropathy can also cause tropical ataxic neuropathy. This is seen in a Nigerian Yoruba population and includes sensory symptoms, optical atrophy, and ataxia due to degeneration of the posterior spinal cord. The symptoms may improve after stopping the intake of cassava with thiamine supplementation.

Damage to the motor neurons, parkinsonism and cerebellar ataxia, with dementia, form various parts of the spectrum of neurological cassava poisoning. The suspected culprit is cyanate formation (rather than thiocyanate formation, which requires sulfur from dietary proteins) in malnourished individuals, which causes axonal damage. Cognitive deficits may also occur.

Prevention of cassava-associated toxicity is by using strains with low levels of toxins, better detoxication processes, free availability of a wider range of nutritional foodstuffs, and broader measures to help farmers deal with climate variation and reduced water availability.

Thus the words of Strong ring true: “Many apparently wholesome foods contain chemical substances which can have undesirable effects on the animal or human body if the foods containing them are consumed over long periods of time or if certain circumstances combine to prevent normal detoxification.” Among the best ways to avoid toxicity while utilizing these foods for their nutritional and taste value is by avoiding food dependency born of food scarcity in low-income populations, and to test new environmentally hardy strains with low toxin levels. Preparing for climate change-induced shifts in cropping patterns will help avoid increasing dependence on potentially toxic foods. Researcher Spencer says, “Prevention of brain disease is our principal goal – seeking and understanding the chemical causes of disease and minimizing human exposure.”