Some forms of breast cancer cause no symptoms in the initial stages, so it is crucial to attend regular screenings. As with other forms of cancer, a person’s outlook is more favorable when a doctor detects the disease early.

According to the American Cancer Society (ACS), the most common sign of breast cancer is a new lump or mass in the breast. People should become familiar with the typical look and feel of their breasts so that they can detect any changes early on.

Breast cancer can develop in males and females, but due to differences in breast tissue, the disease is much less common in males.

Below, we outline some early indications of breast cancer in females and males. We also describe the various types and treatment options. Finally, we look into some benign conditions that people may mistake for breast cancer. 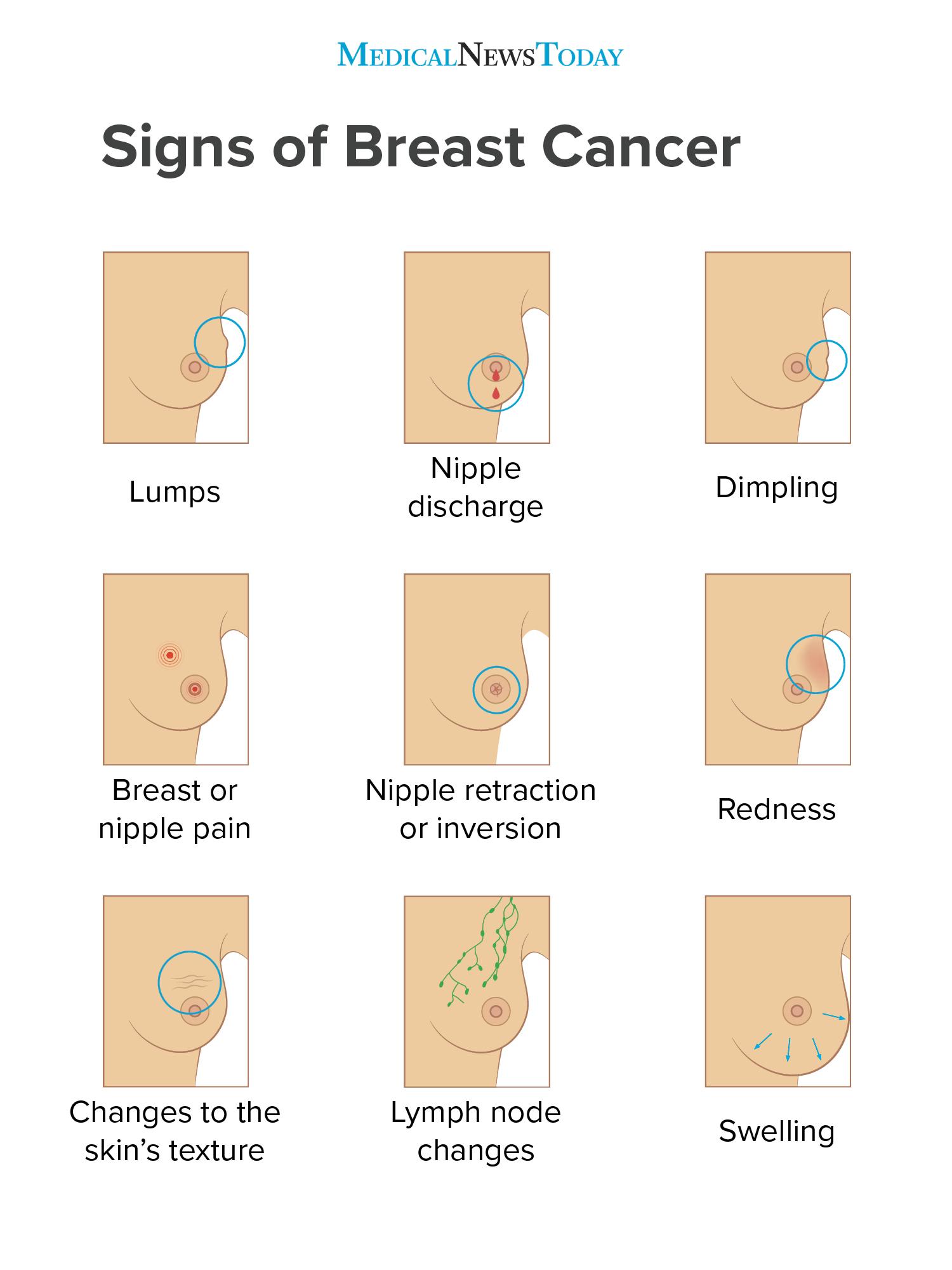 A new mass or lump in breast tissue is the most common sign of breast cancer.

The ACS report that these lumps are usually hard, irregular in shape, and painless. However, some breast cancer tumors can be soft, round, and tender to the touch.

The following breast changes can be symptoms of breast cancer:

Many of these changes can also result from other health issues.

However, if a person notices any changes in their breast tissue, they should see a doctor as soon as possible. It is important to rule out cancer as a possible cause.

Each form of breast cancer develops in a different part of the breast and can affect different types of tissue.

Since many breast cancers cause no symptoms, people should attend regular screenings. This can help identify the disease in its early stages.

Below, we outline the types of breast cancer and their symptoms.

Lobular carcinoma in situ refers to an area of abnormal cells confined to the milk-producing glands of the breast in females.

Because these cells do not spread to surrounding tissues, experts do not consider lobular carcinoma in situ to be a “true” cancer. However, it can increase the chances of developing other types of breast cancer.

This condition rarely causes symptoms. In some cases, tiny white specs of calcium called microcalcifications show up on a routine mammogram.

This develops in the breast’s lobules — glands that can produce milk — and invades nearby breast tissue.

In the early stages, invasive lobular carcinoma may not cause symptoms. Or, a person may experience:

Ductal carcinoma in situ refers to an area of abnormal cells that are confined to one of the breast’s milk ducts.

When a person receives this diagnosis, it means that the cells have not invaded surrounding breast tissue. However, having ductal carcinoma in situ can increase the risk of developing an invasive breast cancer later on.

This condition generally does not cause symptoms. Rarely, a person may notice a lump in the breast or some discharge from the nipple.

This is the most common type of breast cancer, accounting for around 80% of cases.

Invasive ductal carcinoma begins in the breast’s milk ducts and invades surrounding breast tissue. Over time, the cancer can spread to nearby lymph nodes and other tissues.

In its early stages, invasive ductal carcinoma may not cause symptoms. For some people, the first indication is a new lump or mass within the breast.

People with this type of cancer may also experience:

Some less common types of breast cancer include:

Males have small amounts of breast tissue, which does not develop during puberty. Rarely, cancer forms in this tissue.

The ACS estimate that in 2020, doctors in the United States will diagnose about 2,620 cases of breast cancer in men. Approximately 520 men will die from the disease in the same year.

Males with breast cancer may experience:

See a doctor about any changes in the breast or nipple. It is important to seek medical attention for:

Typically, the diagnostic procedure begins with an examination of the breast. The doctor will feel for lumps within the tissue and may also check the lymph nodes.

The doctor will also ask about the person’s medical history and whether there is a family history of breast cancer.

The doctor may then order additional tests, including:

If breast cancer is present, the doctor will describe the treatment options and next steps.

Some of the most common breast cancer treatments include:

The doctor will describe the various options at each stage of treatment and work to determine the best course of action.

Several benign breast conditions can cause symptoms that resemble those of cancer. Some of these issues require treatment, while others go away on their own.

Though these conditions are benign, they can cause:

Some common benign breast conditions include:

If a person is not sure what is causing any breast-related symptom, they should talk to a doctor as soon as possible.

As with most cancers, early breast cancer detection and treatment leads to a better outcome.

The most common sign of breast cancer is a new lump, but any changes to the shape or feel of a breast can indicate a problem.

Females should attend regular breast examinations and let a doctor know about any breast-related symptoms or changes.

Survival rates can help people understand the likelihood of treatment being successful. A 5-year survival rate indicates the percentage of people who are living 5 years after their diagnosis.

According to the ACS, when a doctor diagnoses breast cancer before it has spread beyond the breast, the 5-year survival rate is 99%.

However, many factors specific to each individual affect these estimates. A doctor can provide more detailed information about a person’s outlook.