A new study published in the journal JAMA Network Open in March 2020 shows that dentists can eliminate opioid analgesia from their armory of pain reliever after a tooth extraction, or at least dramatically reduce its use.

Older randomized controlled studies have already suggested that opioids do not perform better than acetaminophen or non-steroidal anti-inflammatory drugs (NSAIDs) after tooth extraction. About 6% to 6.5% of opioid prescriptions in the US come from dentists. Though this is a small percentage, in many cases this serves as the introduction to opioids, and especially for minors, dental prescriptions are among the leading prescribed opioids. 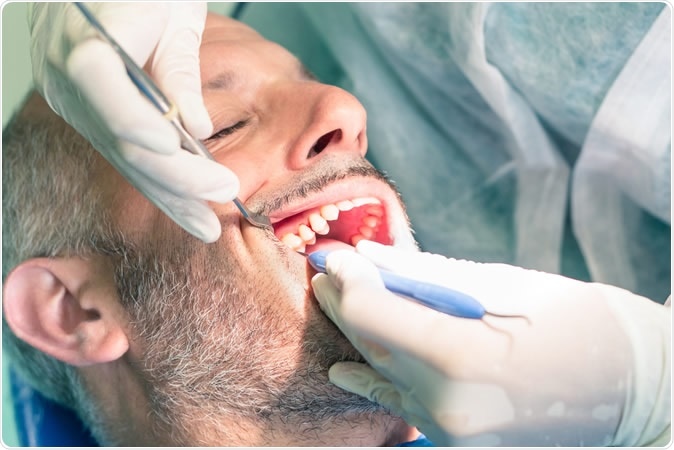 The researchers carried out a quality improvement study on over 325 patients who had dental extractions within the last six months. Opioids were prescribed for about half of the patients who underwent surgical removal, and almost 40% of those who had routine extractions.

The investigators asked them about the use of opioids by prescription, the use of NSAIDs, their post-operative pain, and satisfaction with the level of care compared with those who did not use opioids.

The study shows, according to researcher Romesh Nalliah, “The most important finding is that patient satisfaction with pain management was no different between the opioid group and non-opioid group, and it didn’t make a difference whether it was surgical or routine extraction.”

Patients on opioids reported worse pain after either type of extraction, compared with those on non-opioids. These study results could well call for a complete revamping of dental pain-relieving practices following a tooth surgery. At present, the American Dental Association (ADA) urges prescribing opioids for less than seven days.

Nalliah says that’s by far too much. He would promote cutting out opioids from all post-extraction patients except for those who are hypersensitive to the drug. According to this scientist, “I would estimate we can reduce opioid prescribing to about 10% of what we currently prescribe as a profession.

Another problem with opioid prescription is that patients, in both categories, left about half of the prescribed drugs unused, leading to the risk of opioid misuse if they are left around inappropriately. Opioid addiction has reached epidemic levels in the US, with almost 50,000 deaths related to opium in the US in 2017. It is unique in being the one US public health issue with an increase in associated mortality and is the primary cause for a worsening life expectancy for the third year in a row since World War I.

Especially after the use of an opioid, pain relief is worse, and adverse effects more serious. Satisfaction was the same for both forms of extraction.

Given these findings, which corroborate earlier research, researcher Chad Brummett and his team at Michigan Opioid Prescribing Engagement Network, or Michigan OPEN, has come up with guidelines for dentists to manage acute pain after dental surgery or medical procedures.

Says Brummett, “These data support the Michigan OPEN prescribing recommendations calling for no opioids for the majority of patients after dental extractions, including wisdom teeth extraction.”

Not only so, but many dentists who fear that their practice will shrink drastically if they do not prescribe opioids can also draw strength and courage from the new guidelines. From now, acetaminophen, and other NSAIDs, can be used, because they do offer excellent pain relief with high levels of patient satisfaction.

Nalliah comments on this by giving two explanations: opioids could have been prescribed for only the most difficult cases, which means the increased post-operative pain is due to the nature of the procedure and not the non-efficacy of the opioids. Or, he says, “The reason I tend to accept, is that our study concurs with previous studies that suggest opioids are not the most effective analgesic for acute dental pain.”