A new study shows that people who start smoking younger are more likely to continue to smoke daily as adults and find it much harder to quit. The study, published in the Journal of the American Heart Association in April 2020, is remarkable for having the most prolonged follow-up period of any similar study.

Even though public health authorities have been fighting the use of tobacco for decades, the fact remains that 250 to 270 million people still smoke in developed countries, a number which has remained unchanged over 30 years. Tobacco use has been linked to nicotine addiction, asthma exacerbations, respiratory infections, chronic obstructive lung disease, lung cancer, and cancers of the throat, as well as cardiovascular complications, including heart attacks, strokes, and clots in the deep veins. About 6 million people die every year in the over-30 age group because of smoking-related complications.

Also, smoking causes absenteeism, reduces productivity, and causes loss of useful funds on the part of the smoker. Quitting attempts are notoriously ill-fated due to multiple causes, like the strength of addiction, the occurrence of withdrawal symptoms, weight gain after quitting. 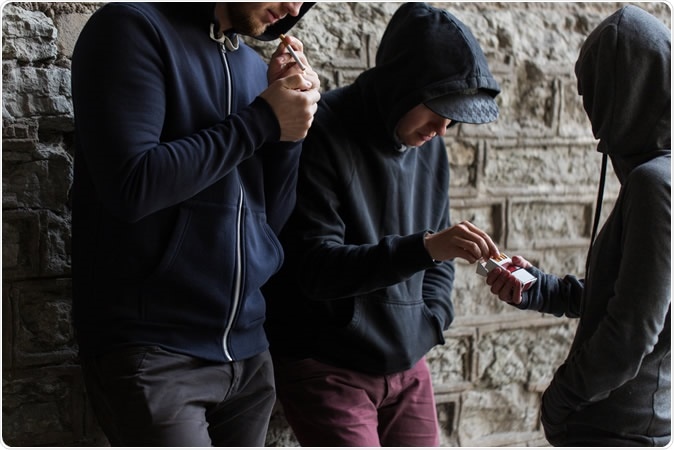 How was the study done?

The study used information on smoking onset obtained from children and adolescents back in the 1970s and 1980s, which was updated as recently as 2018 – making for a follow-up period of over 40 years for some participants.

The researchers looked at smoking-related information obtained from over 6600 people, of whom 57% were female. The participants were taking part in the International Childhood Cardiovascular Cohort Consortium. They were aged between 6 and 19 years during the first contact. The second round of data collection was carried out when they were in their 20s, with the third round being in their 40s. The study covered people from Finland, Australia, and the US.

What did the study find?

About 37% of people in their 20s smoked daily and the level of parental education was associated with lower levels of smoking in this age group.

The researchers found that the highest risk of developing a daily smoking habit by the age of 20 years was among those who smoked the most as teenagers and started at the earliest age. These individuals were also least likely to quit by the time they were in their 40s.

Children who only smoked a few cigarettes were still more likely to end up as daily smokers by the time they reached adulthood. Up to a third of those who tried smoking at 15-17 years continued to smoke in their 20s in contrast to 9% of those who tried it at 18-19 years.

However, those who did not smoke daily in late adolescence were much less likely to end up as smokers in their 20s.

Among those who did not smoke until their 20s, less than 3% smoked in their 40s.

The percentage of childhood and teenage smokers was comparable in the three countries – Australia, Finland, and the US. Although all these are developed countries, it is thought that the results could be more broadly generalizable.

What does the study show us?

Smoking cessation at later adolescence is more successful than when attempted earlier in the teenage period. Researcher David Jacobs says, “Even in low income and developing countries, the societal reinforcement of smoking, the basic addictive qualities of nicotine, and the maturation of children and children’s judgment through adolescence are universal.” As a result, the ability to resist the impulse to blindly copy one’s peers or heroes and take up smoking is much stronger by the end of adolescence. This indicates the importance of preventing the targeting of immature minds by tobacco advertising and other social influences which promote smoking.

Says Jacobs, “These results strongly support Tobacco 21, a national movement to restrict all sales of tobacco products to people under age 21.” The fact that smoking is a preventable risk to long-term health for both the smoker and for non-smokers, and that its origins are traceable to childhood, spurs the battle for prevention of cigarette advertising on media that children have access to.

Tobacco regulatory expert Rose Marie Robertson, of the American Heart Association, says the findings could well apply to vaping, or e-cigarette use, as well. Even though vaping was not around at the time when the current study was initiated, she says, “It is plausible that the findings may relate to vaping as well since both addiction to nicotine and the adverse effects of nicotine on the developing brain in youth are relevant to these nicotine delivery devices as well.”

The study is a critical one in that the long period of follow up enabled the researchers to see what actually happens as young smokers age, across different populations. In order to prevent the development of chronic tobacco addiction, it is vital to prevent youngsters less than 21 years of age from getting tobacco products, even to experiment with. While experimentation with tobacco is unwise at any age, it is particularly unadvisable earlier in life because of the strong association with “unbreakable lifelong smoking patterns,” according to the study.

Doctors and other medical professionals should invest time in explaining the health risks to children who smoke, as well as to their parents since these predispose to lifelong disabling health conditions.