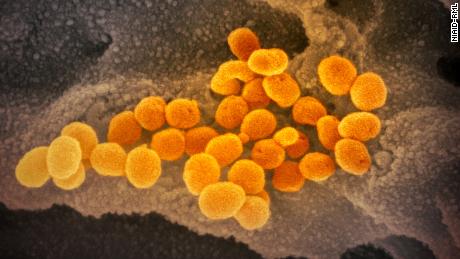 The state is trying to determine whether the novel coronavirus poses a threat to children that hadn’t previously been recognized and is working with federal officials on how to explain what other states’ hospitals should be looking for, Gov. Andrew Cuomo said.
“We were laboring under the impression young people were not affected by Covid-19. … We’re not so sure that that is the fact anymore,” Cuomo told reporters Saturday.
State officials had warned earlier this week that dozens of children in the state had been hospitalized with a condition doctors described as “pediatric multisystem inflammatory syndrome,” and that it could be linked to Covid-19.
The children had fever and symptoms similar to toxic shock syndrome and Kawasaki disease, the state had said. Kawasaki disease causes inflammation in the walls of blood vessels, including those that supply blood to the heart, which in rare cases can lead to deadly limitations in blood flow.
The state has said many of the children tested positive for Covid-19 or had its antibodies. But they didn’t necessarily present with typical symptoms for the coronavirus disease, such as respiratory distress, Cuomo said.
Your top coronavirus questions answered
The state now knows of 73 children with the syndrome and three of them have died, Cuomo said.
His office said they were: A 5-year-old boy who died Thursday in New York City; a 7-year-old boy in Westchester County; and a teenager in Suffolk County. No names were released.
Researchers still don’t know whether coronavirus caused the syndrome. But this is under investigation, Cuomo said.
“We still have a lot to learn about this virus,” he said.
Similar reports of this syndrome in children have appeared elsewhere: In Seattle; at Stanford Children’s Hospital in California; and in the United Kingdom, Italy and Spain.

There have been glimmers of hope in some coronavirus hot spots in the United States amid frustration as states continue reopening.
In New York, the numbers of new daily cases, hospitalizations and intubations are declining, Cuomo said Saturday.
Numbers appear better in other parts of the US, too.
Georgia Gov. Brian Kemp tweeted that Saturday marked the lowest number of Covid-19 positive patients hospitalized since hospitals started reporting that data April 8.
Hawaii on Friday reported no confirmed cases of coronavirus for the first time since March 13. Meanwhile, Friday was the second day in a row that hard-hit New Orleans in Louisiana reported no new coronavirus deaths.
Those bright spots come as swaths of the country continue to disagree on how to move forward with battling the deadly virus.
By Sunday, at least 47 states will have eased restrictions meant to slow the spread of the virus. These states are allowing some combination of businesses, services or parks to reopen or restart, often with caveats for spacing and sanitation. 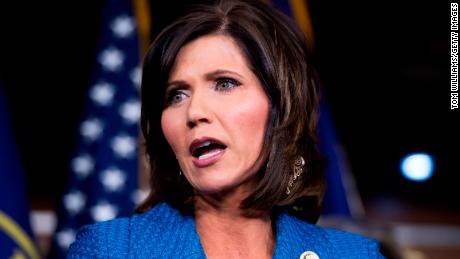 Still, more than two-thirds of Americans worry that their states are reopening too quickly, according to a new poll from the Pew Research Center. Yet protesters have taken to the streets in some states, demanding that businesses get people back to work quicker.
In South Dakota, state officials and two Sioux tribes are at odds over checkpoints that the tribes set up on state and US highways to keep the virus from tribal lands.
Gov. Kristi Noem on Friday gave the tribes 48 hours to remove the checkpoints or risk legal action. The Cheyenne River Sioux Tribe declined the governor’s order, saying, “we will not apologize for being an island of safety in a sea of uncertainty and death.”
At least five states — California, Nevada, North Dakota, Maryland and Rhode Island — are easing some restrictions this weekend. In California, retailers were allowed to offer curbside pickup Friday and Los Angeles on Saturday reopened its trails, parks and golf courses.
And Saturday also offers the country’s first major sports event since the virus lockdowns began in March. UFC 249 is scheduled to kick off Saturday evening in Jacksonville, Florida — viewable by livestream and TV, with no spectators at the venue — though one preliminary-card fighter has withdrawn after testing positive for the virus.
Some health experts have warned that states are not ready to relax restrictions, saying they’ve not met all federal guidelines, such as having aggressive testing.
These experts say reopening now could lead to alarming spikes in the number of infections and that because it takes time for symptoms to show, it could be weeks before the US sees the spikes.
As of Saturday evening, more than 1.3 million cases of novel coronavirus have been recorded nationwide, including at least 78,792 deaths, according to Johns Hopkins University. 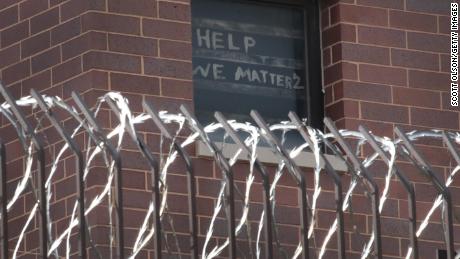 Infections from the White House to prisons

As states continue to navigate the reopening process, members of the Trump administration — including some of the President’s coronavirus advisers — dealt with possible exposure. 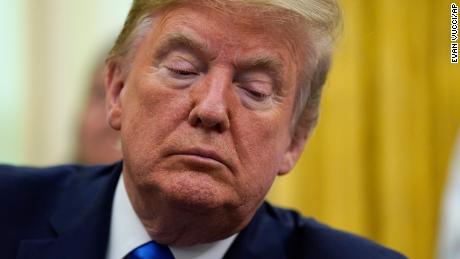 The head of the Centers for Disease Control and Prevention, Dr. Robert Redfield, will be self-quarantining for two weeks after he was exposed Wednesday to a person at the White House who tested positive for Covid-19, a CDC spokesperson confirmed to CNN on Saturday. Officials will not identify who Redfield was exposed to. The Washington Post first reported Redfield’s action.
Dr. Anthony Fauci, the director of the National Institute of Allergy and Infectious Diseases, told CNN on Saturday he will begin a “modified quarantine” after making a “low risk” contact with the White House staffer who tested positive.
The head of the Food and Drug Administration will self-quarantine for 14 days after coming in contact with a person who tested positive, an FDA spokesman said Friday. The FDA did not name the person with whom its chief, Dr. Stephen Hahn, came into contact.
One of President Donald Trump’s personal valets, a member of the US Navy, tested positive for the coronavirus, CNN learned Thursday. Valets assist the President and first family and are responsible for the President’s food and beverages.
Vice President Mike Pence’s press secretary, Katie Miller, tested positive Friday for the virus, Trump confirmed. Miller has not come into contact with Trump, but she had been in contact with Pence, the President said.
The President and Vice President have recently tested negative, deputy White House press secretary Hogan Gidley said.
Ivanka Trump’s personal assistant tested positive for coronavirus, a source familiar with the matter tells CNN. The assistant had been teleworking for nearly two months and was tested out of an abundance of caution, the source said. Ivanka Trump and Jared Kushner both tested negative today, the source told CNN.
Elsewhere, federal and state prisons have had thousands of inmates test positive for the virus. The facilities that often are limited in the abilities to socially distance have been the site of some state’s biggest outbreaks. 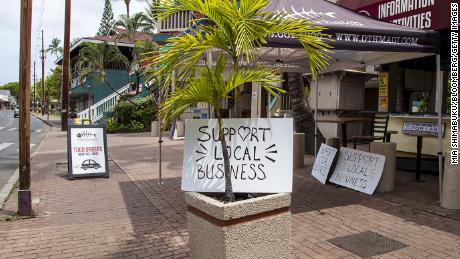 In Arkansas, more than 1,000 inmates have tested positive — with 876 from a single correctional facility, according to Dr. Nate Smith, the Director of the Arkansas Department of Health. For Ohio, 20% of the state’s infections are attributed to people behind bars.
Throughout the pandemic’s hold on the US, nursing homes also have been especially vulnerable. The large populations in close quarters as well as the virus’s severity on older adults has led to large numbers of infections.

Tempers have flared in some parts of the country over business closures and over some local or state governments’ guidelines about wearing masks in public places. 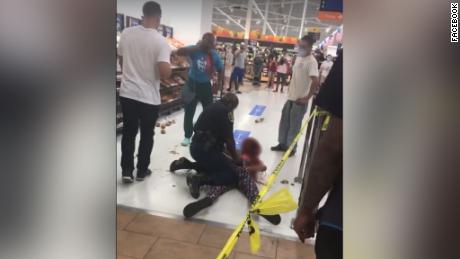 In Alabama, police say a woman became disorderly Tuesday at a Walmart in Birmingham after a worker asked her to put on a mask before entering the store. Video shows an off-duty officer lifting the woman up and dropping her to the ground while trying to detain her; police say she’s been charged with disorderly conduct and other counts.
In Michigan, a Family Dollar security guard was shot dead last week after he told a woman to wear a face mask, officials said. Police also arrested a man who allegedly wiped his nose on the sleeve of a Dollar Tree employee who asked him to wear a mask. 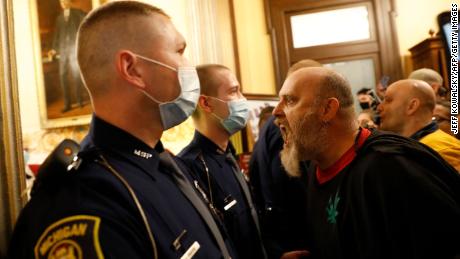 Protesters flocked the Michigan Capitol in recent days, demanding an end to the state of emergency in place through May 28. But Gov. Gretchen Whitmer also relaxed restrictions so some businesses can reopen and the public can participate in outdoor activities like golf and motorized boating. 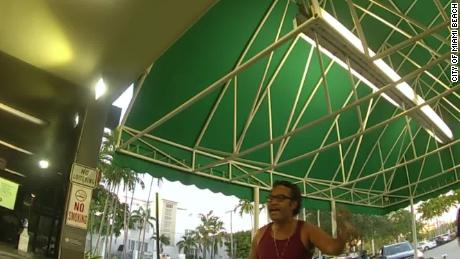 In Florida’s Miami-Dade County, a bus driver says that after she asked a coughing passenger to wear a mask, that person spat on her and fled.
In Miami Beach, a man shouted “this is a false flag, a fake pandemic” in a grocery store during a profanity-laced tirade this week as a code compliance officer told him he needed a mask to enter.
The city of Stillwater, Oklahoma, revoked an order requiring residents to wear face coverings inside buildings after workers received threats.