Technology is truly changing the lives of many people with diabetes across the world. Advancements continue in many areas, including the development and testing of various automated insulin delivery systems.

The MiniMed 670G insulin pump system is the first of it’s kind in providing automatic insulin delivery adjustments based on continuous glucose monitoring (CGM) data. Now, two recent research studies, the results of which were just presented this weekend at the American Diabetes Association (ADA) 80th Scientific Sessions, are highlighting the positive outcomes of the system for young and adults patients.

Dr. Stephanie Kim, MD, MPH, from the University of San Francisco, CA, presented the results of a single-center research study in adult patients with type 1 diabetes. The researchers enrolled 52 patients (47% female, average age 46 +/-12 years, average diabetes duration of 27 +/- 15 years) utilizing the Medtronic 670G system and started “Automode” delivery of insulin between 2017 and 2019, in an effort to evaluate the impact of automatic delivery on glycemic outcomes.

The study subjects were stratified into two groups, depending on baseline blood glucose levels (defined as A1c level of higher than 7.6% or lower than or equal to 7.5%). The A1c levels were evaluated at baseline (before starting Automode) and again approximately 17 months after starting Automode.

The data revelated that while the A1c level did not change significantly in patients in the lower A1c cohort, there was improvement in the group with baseline A1c>7.6%. These patients improved their A1c, on average, from 8.3% to 7.8% using this system.

Dr. Goran Petrovski, MD, PhD, of Sidra Medicine in Qatar, reported on the results of an observational study of children and young adults with type 1 diabetes who used multiple daily insulin injections (MDI) and switched to the MiniMed 670G hybrid closed-loop system. A total of 42 patients (ages 7-18, mean age 12 years) were enrolled in the study.

Excitingly, the study outcomes demonstrated considerable improvements to the average A1c levels (8.4% at baseline to 6.7% at 3-months follow-up, and 6.9% at 6-months follow-up) after initiating the hybrid closed-loop system therapy. Also, the time-in-range (defined in this study as blood glucose levels between 70-180 mg/dL) improved considerably with the use of this technology. Notably, no instances of diabetic ketoacidosis (DKA) or severe hypoglycemia were reported. The authors declared no conflict of interest and concluded that “children and adolescents with T1D can successfully initiate the HCL system, achieve and maintain better glycemic control than previous MDI regimen.” 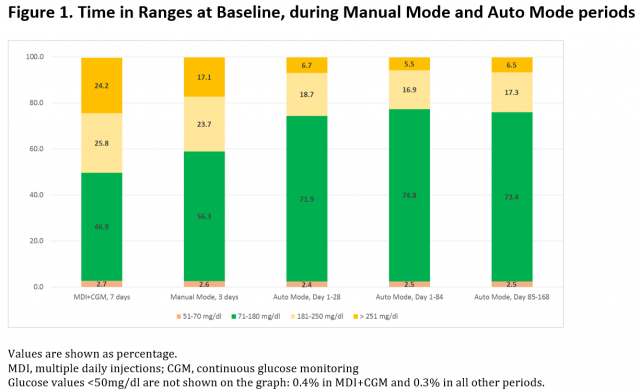 Technology that can help people with diabetes better manage their blood glucose levels continues to improve. Notably, while the glycemic improvement in youth who transitioned from MDI to the automated system were considerable, the improvements were much more modest in the study on adults using this system who switched to Automode. Altogether, the data highlight the potential of technology to improve outcomes, while also revealing that technology use (at least as it stands today) is generally not enough on its own, to achieve optimal results. Patient education regarding diet, exercise, and the numerous intricacies of dosing insulin remain central to optimizing outcomes.