As COVID-19 cases rise rapidly throughout the South, some scientists believe there could be an important, but overlooked factor in the spread of the virus in the region―air conditioning. 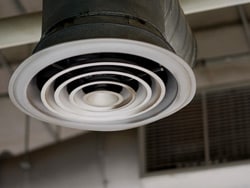 Just as chilly winter temps create the perfect conditions for passing colds and flu—driving people indoors and into closer proximity for more hours of the day where it’s easy to swap germs, researchers believe broiling heat in the southern U.S. could be having the same effect, sending people indoors where whirring air conditioners are running full blast.

“You go indoors for the cool, just as in the northeast and other cool places you go in for the warmth in winter, so you’re less socially distanced,” says Edward Nardell, MD, professor of environmental health and immunology and infectious diseases at Harvard’s T.H. Chan School of Public Health. “You’re more likely to be touching the same surfaces that have been contaminated by people speaking and coughing etc.,” he says.

And that’s not the only problem.

Air conditioning is also risky because of the way air handlers work. When outdoor temperatures are extreme, HVAC systems adjust the mix of fresh air they pull in to save energy. That means the hotter it is outside, the more indoor air recirculates, which means, “You’re breathing a higher percentage of the same air that other people are exhaling,” Nardell says. If someone in the building is shedding the new coronavirus, it can build up in the recirculated air.

And this may seem obvious, but air conditioners have fans that blow the air around. That gives the smallest viral particles—aerosols―extra lift to say suspended in the air for longer. “The air currents that are produced by air conditioners and also fans and other air moving devices can carry particles further than they might otherwise go,” he says.

In certain situations, that combination of factors may create the perfect conditions for contagion.

Studies of air conditioning come as more evidence emerges about airborne spread of COVID-19. In a commentary published this week in the journal Clinical Infectious Diseases, an international group of 239 scientists have appealed to “national and international bodies” including the World Health Organization, to recognize this potential for airborne spread.

“We’re pushing because we need very clear, consistent messaging to the world,” said Shelly Miller, PhD, a professor of mechanical engineering who studies indoor air quality at the University of Colorado at Boulder. Miller was one of the chief proponents of the commentary. “This virus is opportunistically airborne, you can get it by inhaling it,” she says.

Miller and others believe that WHO and other public health agencies have a blind spot when it comes to airborne transmission.

This virus is opportunistically airborne, you can get it by inhaling it.
Shelly Miller, PhD, University of Colorado at Boulder

“Based on our assessments of outbreaks, air sampling, and animal studies and we have just as much evidence to show that airborne transmission is happening as is surface transmission, so we need clear guidance for how to address this,” Miller says.

In its latest press briefing, WHO experts responded to the communication, and said the agency would be publishing a scientific brief summarizing their view of the science shortly.

“We acknowledge that there is emerging evidence in this field,” said Benedetta Allegranzi, MD, WHO’s technical lead for infection prevention and control, “We believe we have to be open to this evidence and understand its implications regarding the modes of transmission and the precautions that need to be taken,” she said.

The Role of Air Conditioning

So far, there are just a few studies pointing to the role of air conditioning in the spread of COVID-19. They indicate more research in the area is needed. In July, Chinese scientists published a short study detailing the results of their investigation of a cluster of COVID-19 cases linked to the same restaurant. The 10 diners who fell ill were all sitting at tables on the same side of the room. The tables were spaced more than 3 feet apart, though, indicating that the virus probably wasn’t being passed through larger droplets, which fall out of the air pretty quickly. Instead, they think “strong airflow” from a wall mounted air conditioner probably spread aerosols, or “micro-droplets”, from a single infected, but asymptomatic person over the tables, infecting three different families.

In another study, which hasn’t yet been peer reviewed, researchers swabbed three different HVAC units at the Oregon Health and Science University Hospital in Portland. Then they checked their samples for the presence of genetic material from the SARS-CoV-2 virus. The swabs were positive in 1 out of every 4 samples taken.

“We found it in multiple locations within the air handler,” says study author Kevin Van Den Wymelenberg, PhD, a professor of architecture and director of the Institute for Health in the Built Environment at the University of Oregon in Eugene.

Van Den Wymelenberg says their study can’t prove that the remnants of the virus they picked up could have actually infected anyone. To know that, they would have had to try to grow their samples alongside cells in a petri dish and watch to see if those cells were infected. Those are expensive studies to perform and they require a specialized lab certified to handle highly contagious germs—called a biosafety level 3 lab. Those are less common, and they’re all currently slammed with projects.

But he says his study does show that genetic material from the virus is making it into the machinery of massive air handlers in hospitals, even ones that are using good filters, and he thinks that should make public health experts closely consider air conditioning as a vehicle for virus spread.

Miller says that the easiest thing to keep the virus from building up inside is to bring in more outdoor air. In homes, that means opening windows and doors regularly to let fresh air in.

That’s harder to do in commercial buildings.

“What we’ve been recommending to minimize risk indoors is to provide 100% outside air, which you can’t do if you’re trying to heat or cool because it just costs way too much money,” she said.

Another strategy to reduce the risk of being indoors is to kill airborne viruses with special wall or ceiling mounted boxes that emit short-range UV radiation. This kind of UV light doesn’t damage skin the way sunlight does, but still zaps harmful germs. These so-called upper-room germicidal systems have successfully controlled outbreaks of other airborne viruses, like tuberculosis, Nardell says.

Finally, you can invest in an air cleaner. Miller cautions that if you go this route, you need to do a fair amount of homework first, learning about things like a machine’s clean air delivery rate, or CADR.

“I purchased an air cleaner strictly to operate when and if somebody in my household gets sick so we can reduce the viral load in my house air,” she says.

Miller recommends checking the website of the Association of Home Appliance Manufacturers, or AHAM to find a good air cleaner.

“They have a whole website set up to do your research and buy a good air cleaner that will work in your home or office,” she says.

Shelly Miller, PhD, a professor of mechanical engineering, The University of Colorado at Boulder, Boulder, CO