Residents of those Greek houses have been told to quarantine for 14 days from the day the outbreak was declared. Alpha Delta Pi and Alpha Xi Delta have six cases each, while Chi Omega and Kappa Delta have five cases apiece, the Riley County Health Department said Friday. 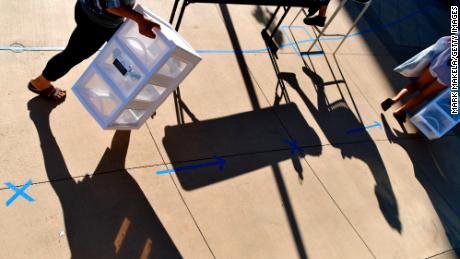 More than 60 US universities and colleges in at least 36 states have reported positive cases of Covid-19, and some have returned to remote learning to try to stem the spread. More than 8,700 infections among American college students and staff were reported through Friday, as the nation approaches 6 million confirmed cases.
At Kansas State, event permits associated with fraternity and sorority organizations through September 10 have been canceled or revoked.
“It is no longer deemed safe to hold these events in person and they may not take place,” the county said in a statement.
Is it safe to go to college? Health experts weigh in
At the campus in Manhattan, 364 students are in quarantine, and 167 students are in isolation, the school said in a news release, noting an increase of 149 in quarantine and 49 in isolation since last week. The entire student population reports a 3.82% positivity rate, the release states.
Meantime, the University of Kansas reported a 10% positivity rate among its Greek community, with 270 members of sororities and fraternities there testing positive. That campus, in Lawrence, is about 75 miles from Kansas State.
Statewide, Kansas has recorded more than 40,000 coronavirus cases, with 445 deaths.