“It’s great to talk about this utopian kind of idea where everybody has a test every day and we can do that,” Giroir said. “I don’t live in a utopian world. I live in the real world and the real world had no tests for this new disease when this first started.”
The assistant secretary for health at the US Department of Health and Human Services also said that the country now has a “huge diversity” of tests, including a $5 point of care test that provides results within 15 minutes.
“There is no stone unturned, there is no technology that we’re not looking at or investing in if it’s promising,” Giroir said. “We can return to society without having everyone have a test every single day. We can do that. We’re showing we can do that.
“There may be a time where everybody can wake up in the morning, pass through a tricorder and tell whether they’re infected or not,” Giroir said, referring to the fictional handheld device from “Star Trek” that could scan people for data. “We are not there yet.” 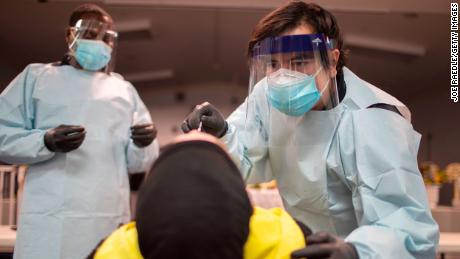 Testing availability and speed has improved in the US, particularly since the disastrous spring delays. Giroir said 91.9% of results from major referral labs, which do about half the tests in the US, were completed in three days. The mean turnaround time in August for large referral labs was 2.27 days.
Still, that 2.27-day average delay allows the virus to quietly spread, and public health and lab industry experts have repeatedly called on the federal government to take a larger leadership role in coordinating testing supplies.
CNN Senior Medical Correspondent Elizabeth Cohen indicated that Giroir was attacking a straw man. Testing is an important part of public health strategy, but no one seriously argues testing can solve everything alone.
“He says, ‘People say we can test our way out of the pandemic.’ I have never heard anyone seriously say that,” Cohen said. “He needs to stop making up these boogie men who he’s fighting against. No one is telling him we need a utopia. We’re just telling him he needs to do better.” 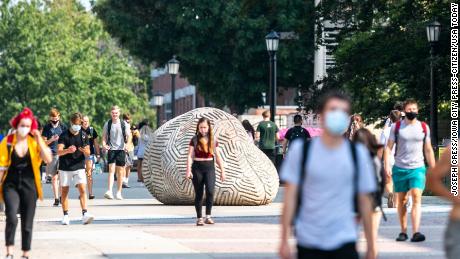 A White House coronavirus task force report sent to officials in the state of Iowa this week warned of dire new case increases across rural and urban areas and called for a mask mandate, the closure of bars, and for university towns to do more as the pandemic intensifies in the Midwest.
CNN has obtained the nine-page August 30 report for the state, first reported by the Des Moines Register, from the Iowa Department of Public Health. The task force releases state-by-state reports each week to governors’ offices, and has so far declined to make them publicly available.
The report says that Iowa is in the task force-defined “red zone” and warns that the state has the highest rate of cases in the US, which increased by 77.4% from the previous week. 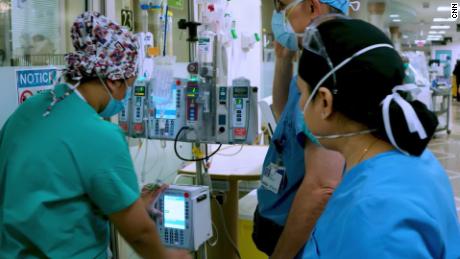 In the report, the task force points to universities as a major factor contributing to the virus’s spread.
“University towns need a comprehensive plan that scales immediately for testing all returning students with routine surveillance testing to immediately identify new cases and outbreaks and isolate and quarantine,” the report says.
The three counties with the highest numbers of cases also have large student populations: Story County, home to Iowa State, and Johnson County, home to University of Iowa, as well as Polk County, which contains Iowa’s largest metro area, Des Moines.
More than 20,000 cases of Covid-19 among students and staff have been reported at colleges and universities across at least 36 states, according to a CNN tally.
Some of the most significant outbreaks have occurred at the University of North Carolina-Chapel Hill, which reported about 900 cases in August; University of Alabama, which reported over 1,000 cases in the past two weeks; and Illinois State University, which reported 750 new cases in the past seven days.
The campus reopenings represent new coronavirus hot spots in a country with plenty enough already as the US surpassed 6 million total confirmed cases on Monday.

Potential and challenge in push for vaccine

At the same time, the US is taking further steps to produce a safe and effective vaccine. Drug giant AstraZeneca says it has started Phase 3 trials of its coronavirus vaccine candidate, the third such vaccine in a Phase 3 trial.
Health officials and the public have expressed concern that the desire for a vaccine could rush the development process and create a less safe and effective result.
The commissioner of the US Food and Drug Administration Dr. Stephen Hahn said last week that a vaccine could be made available through an emergency use authorization before the election.

<!–
However, he said “all options are on the table” when asked if he would resign if pressured to release avaccine before he feels it’s ready.
“I can tell you, our decision at FDA will not be made on any other criteria than the science and data associated with these clinical trials,” Hahn told CBS.
Dr. Anthony Fauci, director of the National Institute of Allergy and Infectious Diseases, said Tuesday on “Good Morning America” that safety and effectiveness was vital.
“You don’t want a vaccine to be available widely to the American public unless it’s been shown to be safe and effective,” he said.
World Health Organization officials on Monday cautioned that emergency use authorization of vaccines should not be taken lightly by regulators like the FDA.
“The emergency use authorization or licensing is something that has to be done with a great deal of seriousness and reflection,” WHO chief scientist Dr. Soumya Swaminathan said during a news briefing.
Health officials in the US have to leap over the hurdle of public distrust if any vaccine is going to be effective.
A poll conducted by Ipsos for the World Economic Forum showed that 74% of people surveyed globally would be willing to get a coronavirus vaccine if one were to come out.
But that number is not high enough, Arnaud Bernaert, Head of Shaping the Future of Health and Healthcare at the World Economic Forum, said in a statement.
In the US, that shortfall is even greater: a CNN poll from August indicated 40% of Americans wouldn’t get a Covid-19 vaccine, even if it’s free and easy to access.