As Digital Posters Take Over, Traditionalists Push Back

Digital posters have taken off at medical meetings in the form of kiosks, oral presentations, and moderated sessions, but some meeting attendees are concerned about the loss of traditional poster boards, which can be key to networking.

“With COVID, everyone had to get used to the technology that’s been out there,” said Richard Rettenbacher, PhD, chief operating officer of CTI Meeting Technology, which manages meetings largely for medical and scientific associations.

Now, digital programming and hybrid meetings are widely seen as here to stay. The dozen or so stations typically set up for moderated digital poster sessions at ACC allow “for a breadth of exposure to a number of [researchers]…and can be easily converted to a virtual format,” said Douglas Drachman, MD, chair of the annual scientific sessions for 2023 and 2024. 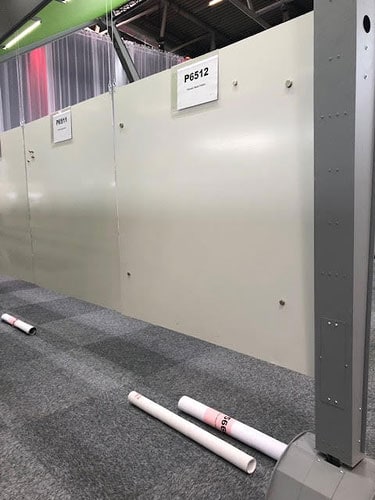 Empty poster boards on the last day of a meeting.

The use of e-posters means presenters can upload files — often with narration — and don’t have to carry poster tubes while traveling, rendering extinct the so-called poster mule role often assigned to junior faculty. Other reasons why the digital versions are preferable, meeting organizers say, are that they don’t require as much labor, materials, or space in convention centers. Paper isn’t wasted. And e-posters aren’t static, which is good for both presenters and learners, they say.

The Heart Rhythm Society (HRS) converted to e-posters for its 2021 and 2022 annual meetings, to the consternation of some attendees. What’s lost with most e-poster formats is the ability for meeting participants to “walk the posters,” quickly hone in on those of interest, and have one-on-one discussions with presenters or “side discussions” with small groups that may gather, cardiologists say.

“I could pass 20 at a time, find the two or three that were of interest to me, and talk with people,” said Edward J. Schloss, MD, medical director of the Cardiac Rhythm Device Program at the Christ Hospital in Cincinnati.

“Some of these little humble posters really do lead to important things — new ideas, papers, relationships,” he said. A discussion around a poster on one center’s experience with Tendril lead failures led to a professional collaboration with Robert G. Hauser, MD, a “seminal figure in device failure research,” who happened to be in the exhibit hall at the time, said Schloss. They discussed the poster, began collaborating, and have since written an article and begun working on a muticenter registry.

Suneet Mittal, MD, director of electrophysiology and director of cardiac research for Valley Health System in Richwood, New Jersey, said he hasn’t felt “the same level of connection” as either a presenter or viewer of e-posters and dislikes the “classroom format” he’s encountered thus far at HRS and other meetings.

After the HRS meeting, Schloss led a weeks-long discussion on Twitter in which participants lamented the loss of traditional paper posters.

I agree. Something very special was lost this year at an otherwise great session.
@HRSonline — please consider pic.twitter.com/jhI0U2qu7o

HRS took note. When the HRS introduced e-posters, “We thought it would be a way to give the poster a little more life,” said Germaine Schaefer, associate vice president of meeting and events at HRS. In 2021, researchers presented across more than a dozen “pods” in a conference room on a rolling basis, with time for questions after each presentation.

Noise was a problem, so in 2022, HRS used “silent theater technology,” Schaefer said. Speakers spoke into microphones, and attendees scanned QR codes using a mobile app and listened to the presentations through headphones. While presenters were pretty happy, “the attendees like the old way better,” she said. “At the end of the day, they just want paper posters.”

HRS will revert back to traditional flat board posters for its 2023 meeting but will maintain some poster pods and will continue to tweak the electronic format, Schaefer said.

ACC will keep its blend of digital and traditional flat board posters for now because each has its own advantages, said Drachman. The flat board posters are an additional expense, but ACC has found that attendees like to engage with presenters and use the opportunity for networking, he explained. The ACC’s 2022 meeting in April featured approximately 540 moderated posters and 2900 flat board posters. 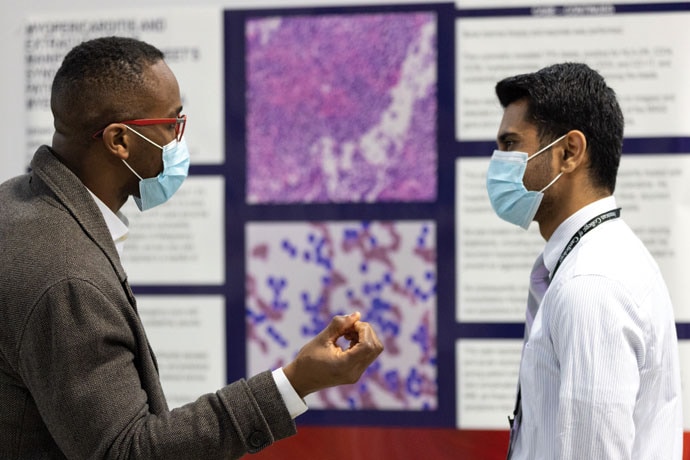 Presenter and attendee discussing a poster at ACC 2022.

For their upcoming meeting, the ESC opted to moderate all e-posters, in part to optimally support scientific exchange for young researchers in particular, “after 2 years with limited personal scientific exchange,” said Prof Stephen Windecker, program committee chair for the ESC Congress, in an email.

While digital posters adhere to the “traditional scientific format,” there’s an “opportunity to further develop [them] by adding videos, commentaries, etc,” he said. “We expect to see new and emerging features taking advantage of the digital format as well as special effects enhancing the educational experience.”

Like other meeting components, the e-poster sessions “make for enduring content, because [they] can be recorded and delivered across the globe but also captured for asynchronous review,” Drachman said.

This may mean more widespread sharing and larger audiences. CTI Meeting Technology recently aggregated data from more than 100 virtual and hybrid meetings and found that groups that left e-posters and other content online for at least 30 days after their meetings saw “50% more content consumption” than those who did not leave content online for that period, according to Rettenbacher.

Cardiology associations and vendors like CTI Meeting Technology continue to fine tune the e-poster experience. But as Schaefer of HRS noted, the questions of “how to replicate the randomness of something catching your eye” and facilitate intimate poster-side conversations are challenging.

At one small internal research conference at Brigham and Women’s Hospital earlier this year, posters were presented on monitors with the researchers standing by — as in a traditional poster hall.

Digital posters can work without compromising the social aspects of sharing science. I’ve seen it. pic.twitter.com/8M8qd54VRT

In an effort to emulate the chance encounter common with traditional poster boards, the ESC is installing “discovery screens” that will display all the e-posters in rotation. And because “it’s somewhat of a culture change,” said Windecker, “we’ll certainly closely analyze the experience and feedback during this year’s congress.”

Time will tell whether tepid e-poster viewers will be completely won over. William Sauer, MD, chief of the cardiac arrythmia service at Brigham and Women’s Hospital, said he’s somewhat optimistic. “I don’t think the right solution is to print out a paper poster that’s hung up for 4 hours and then thrown away. It makes sense to have a digital poster…and all the formats out there are good,” especially for young investigators, he said.

“There’s got to be a solution where we preserve that social aspect and informal banter,” he said. “We’re just on version 1.0 — we’ll get there.”

Christine Kilgore is a Falls Church, Virginia–based medical journalist whose work has appeared in such publications as Internal Medicine News, Ob.Gyn Times, Oncology Times, and the Washington Post.

Astaxanthin: The Super Antioxidant That Comes From the Ocean