Gout Flare-Ups Could Raise Heart Risk for Weeks After 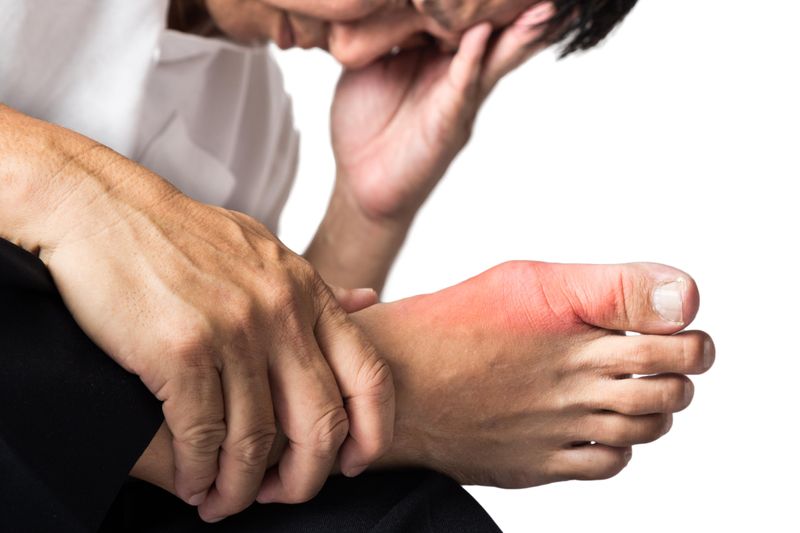 When gout flares up, the joint pain is often excruciating. But that’s not the only worry tied to this common inflammatory arthritic condition.

A new British study warns that gout flares double the risk for heart attack or stroke over the two months that follow.

A spike in risk endures even three to four months after the gout flare-up, investigators found, though at a lower level, about 1.5 times greater than usual. No added risk was seen more than four months after a flare, or recurrence of symptoms.

“Gout often occurs alongside other health problems, such as high blood pressure, heart disease, diabetes and kidney disease,” noted study author Abhishek Abhishek, a professor of rheumatology at the University of Nottingham in England.

To see whether gout flares might also push up the risk for heart attack and stroke, the study team looked at data on more than 62,500 British gout patients between 1997 and 2020.

During that time frame, nearly 10,500 of the patients suffered a heart attack or stroke after being diagnosed with gout.

The finding held up even after excluding all patients diagnosed with heart disease or stroke before learning they had gout.

Moreover, the gout patients who died from a heart attack or stroke had over four times the odds of experiencing a gout flare in the preceding 60 days. And the odds that a flare occurred three to four months prior doubled.

Abhishek stressed that the increased risk was temporary and subsided altogether after four months. Still, the results suggest gout flares are tied to a transient increase in cardiovascular events.

In the United States, the National Kidney Foundation says roughly 4% of American adults suffer from gout. The condition stems from excess uric acid buildup, and it usually affects one joint at a time (often the big toe joint), according to the U.S. Centers for Disease Control and Prevention.

Abhishek emphasized that the study findings do not prove a cause-and-effect relationship between gout flares and serious heart disease risk.

“We can only say at this point that there is an association,” said Abhishek.

However, he characterized the finding as having “biological plausibility.” And he noted that the study design was rigorous and thorough, having taken into account a host of potentially influential factors, such as each patient’s other health issues, prescription drug history, economic background and lifestyle choices.

Fortunately, many gout patients have the chronic condition under control, preventing routine flare-ups through a change in diet and/or by taking a medication that helps to lower uric acid levels. One question is whether these patients might face a similar bump in heart risk, even absent a flare-up.

Abhishek said further studies are needed to investigate those questions.

The study results were published Aug. 2 in the Journal of the American Medical Association.

Anderson agreed that while the finding does not prove that gout flares actually cause heart attacks or stroke, the study team’s conclusions are “consistent with what we know about inflammation as a trigger for heart attacks from infections and from metabolic disorders.”

In fact, Anderson pointed to prior clinical observations and “a large body of evidence from animal and human research” as suggestive that “a causal link [is] eminently reasonable.”

His advice: “During a flare, patients should be aware of an increased heart attack risk and should be alert to the signs and symptoms of heart pains [angina], heart attacks and stroke, and seek immediate attention for treatment.”

To prevent flares in the first place, Anderson said patients should take all the standard steps to try to get their gout under control.

There’s more on gout at the National Kidney Foundation.