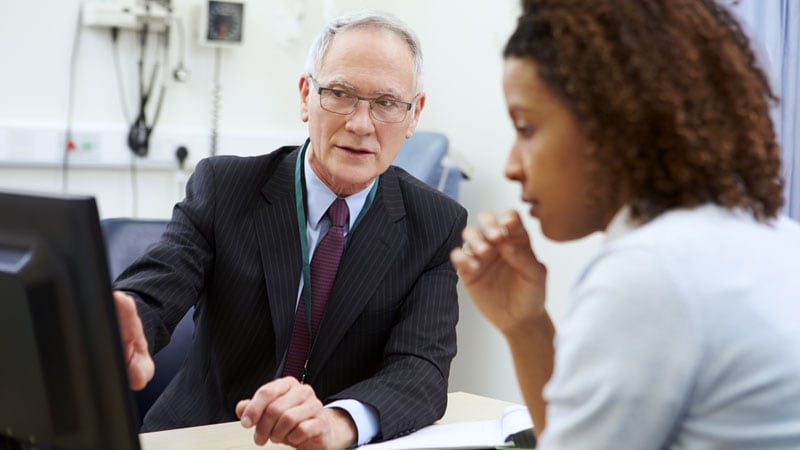 A self-administered Pap test may be a lifesaver for women in countries where there’s no alternative, but it’s a rarity in wealthy countries such as the United States. Unless you’re Black, it seems.

“I’ve literally been in doctor’s offices where I’m there for a Pap smear and they wouldn’t even touch me,” a participant at a Black focus-group told Brown University researcher Kelsey MacKinnon, MPH. The technician handed the woman the swab and told her to take the smear herself.

This jaw-dropping story would not surprise Timothy Rebbeck, PhD, who heads up the Center for Cancer Equity and Engagement at the Dana-Farber/Harvard Cancer Center. “It’s very hard to change systemic racism in our country…[Historically] our systems were not set up to treat everybody equally,” he commented.

Other patients have other stories. In an interview, Barry, a retired Black risk-management consultant from Boston, recalled how his oncologist responded angrily when he questioned the prognosis he’d been given.

“You’re going to die and you need to accept it,” the oncologist told him.

In fact, Barry joined a clinical trial and was treated with the immunotherapy pembrolizumab (Keytruda) and is still alive almost 10 years later.

This retelling of bad experiences with healthcare professionals may account for some of the racial disparity seen in cancer mortality, which is stark.

If you’re a Black American and get cancer, you’re more likely to die of it than your White neighbor.

These comparisons are based on official federal cancer statistics.

But digging deeper into geographic pockets across the United States shows that some areas are managing to reduce these racial disparities.

Bright spots of cancer equality do exist: some jurisdictions are doing a much better job than others of saving the lives of Black patients with cancer, note the authors of a recent study published April 6 in the American Journal of Epidemiology.

The authors were from the US Centers for Disease Control and Prevention, but lead author Lia Scott, PhD, MPH, an epidemiologist, has since moved to Emory University School of Medicine in Atlanta, Georgia.

In their conclusion, they threw out a challenge: let’s find out what makes these counties successful.

Scott said, “Maybe it’s income inequality in one place and educational inequality in another place — we won’t really know until we go and look.”

Medscape Medical News decided to do just that.

In their study, the authors defined a cancer “bright spot” as a county that met two criteria: a Black death rate less than or equal to the national average (“optimal” ratio) and equal Black and White death rates (“equitable” ratio). The most stringent definition of equitable was a ratio of 1.0 ± 5%.

Based on this tight definition of equitable, the tally of cancer bright spots across the 3146 counties of the United States ranged from zero (for prostate cancer) to 63 (female lung-and-bronchus cancer). There were 16 female breast-cancer bright spots. (The authors did not look at cervical cancer.)

The authors did not release the names of the bright-spot counties, but the paper’s supplementary data has a list of 25 counties that had an equitable ratio of 1.0 for at least one cancer.

From among these six, only two counties — Providence County in Rhode Island and Suffolk County in Massachusetts — responded to interview requests from Medscape Medical News.

Scott confirmed that Providence County met the bright-spot criteria for total liver-and-intrahepatic-bile-duct cancer and that Suffolk County was a bright spot for breast cancer.

A Bright Spot on Rhode Island

Providence County is one of five counties in Rhode Island and has a population of approximately 640,000, of which 13% describe themselves as Black/African American and 78% as White.

The county was identified as a bright spot for liver cancer, in other words, the Black death rate was less than or equal to the national average and was the same as for White patients.

Furthermore, in this county the Black:White death ratios for colorectal and lung cancers were ≤ 1.0.

This picture is in contrast to what is seen nationally, where Black mortality from these cancers is much higher than that for Whites.

So, how was this achieved?

Part of the answer may be a public-health culture that emphasizes collaborating with communities at the grass-roots level. For example, in 2016, a network of health equity zones (HEZ) were introduced across the state.

The initiative brings together clinical and community-based organizations working to level the playing field, commented Allegra Scharff, MPH, chief of healthcare equity at the Rhode Island Public Health Department, which handles cancer prevention and treatment access in the state.

The HEZ system now covers 60% of the state and has become the de facto health infrastructure in Rhode Island, said Scharff.

“[A HEZ] really becomes a melting pot, if you will, for…improving the access, affordability, and reach of these services that some of these people desperately need,” said Eric Lamy, who heads up the breast, cervical, and colorectal cancer-screening programs in Rhode Island.

Lamy, who studied as a quantitative economist, emphasized the need for evidence-based interventions for addressing cancer disparities.

In 2020, Lamy asked Scharff to characterize the barriers to cervical- and breast-cancer screening for Black women. Scharff partnered with Kelsey MacKinnon at the Brown School of Public Health to run six virtual focus groups through an affordable-housing organization called ONE Neighborhood Builders. The researchers also conducted interviews with five healthcare providers.

MacKinnon and Scharff shared their unpublished results with Medscape Medical News. Participants cited ‘personal barriers’ such as fear of a positive result and ‘system barriers’ such as poor communication and racial bias from healthcare professionals.

The researchers concluded that “a comprehensive, culturally specific cancer prevention education program is needed for both community members and providers.”

“It’s the communities themselves that know what they need more than we do,” said Lamy. “We can come up with a lot of different theories based on what other people have done maybe 5 or 10 years ago, but the easiest thing to do is just go to the communities and ask, to work within existing social networks, not try to create them,” he concluded.

A Bright Spot in Massachusetts

The other county identified as a bright spot for cancer racial equity, and which agreed to talk to Medscape Medical News, was Suffolk County in Massachusetts. In 2019, this county had an estimated population of just over 800,000, of which 24% described themselves as Black/African American and 62% as White.

Suffolk County was identified as a bright spot for breast cancer, with a Black death rate less than or equal to the national average and equal to that for White patients.

In addition, Black:White death ratios were ≤ 1.0 for male colorectal cancer, total and female liver cancer, and cancer of the lung and bronchus, in contrast to the higher mortality rates for Black patients seen nationally.

Suffolk County is the home of the Boston Public Health Commission, the oldest health department in the United States, as well as the Dana-Farber/Harvard Cancer Center (DF/HCC), a world-class cancer research colossus that mixes 1100 cancer researchers from five Boston academic medical institutions and two Harvard schools.

The head of GI cancer at Dana-Farber, Sapna Syngal, MD, MPH, was pleased to see the bright-spot data. “I think it’s really encouraging…because it does show that things are working,” Syngal said. “This is about having access to care.”

Syngal is co-leader of the DF/HCC’s Cancer Risk and Disparities Program, a focus for more than 50 investigators. Syngal said there has been a “sea-change of interest” in disparities research across DF/HCC, and now each disease-based program has a designated liaison, a move she welcomes.

“Why should disparities sit on its own? It really needs to be integrated as a fundamental component of every cancer that we’re trying to tackle,” Syngal said.

What Still Needs to Be Done in Sussex County?

“What we haven’t solved is the comfort level of under-represented minorities in access to care, in trusting the physicians and being amenable to participation in clinical trials. That’s where we really need to focus community engagement,” Syngal said.

“Then there’s also physician-based factors…Are we offering the same care to every person who comes through our door?” Syngal asked.

DF/HCC’s Initiative to Eliminate Cancer Disparities, created in 2001, is where the ivory tower comes down to earth.

For two decades Karen Burns White, now deputy associate director of this initiative, has worked with communities to build programs informed by community-based participatory research. One example is the Translating Research Into Practice (TRIP) study, a multisite patient-navigation intervention study on the ground since 2018.

“I think where you have to start is in a space of one, recognizing the role of community engagement, being able to listen and learn about the community, and really building programs in the grass roots,” Burns White commented.

Another fruitful program is The Faith-based Cancer Disparities Network, a 14-year partnership that includes nine primarily Black congregations, the DF/HCC, and the American Cancer Society.

Although cancer messaging and religion may seem like an odd couple, no opportunity should be ignored, said Burns White.

Faces of Faith, a photographic exhibition of more than 70 cancer survivors now in its eighth year, destigmatizes the disease and provides a focus for community meetings and testimonies from the people featured.

One of the first “faces” was Arleigh, a minister and documentary filmmaker.

Back in 2012, Arleigh was 2 months from graduating at Harvard Divinity School when she felt a lump in her neck.

The lump turned out to be the first known case of teratoma-associated DICER1 mutation, and details of its diagnosis and successful treatment by a team at Dana Farber was published in 2017 in Thyroid.

Arleigh told Medscape Medical News that her excellent care is not a common experience for Black patients.

“People [of color] haven’t had great experiences of doctors really paying attention to you, listening to you, caring about you,” Arleigh said.

“Faces of Faith is a way to bridge that gap between physicians and medical care and people in the community…Testimonies and giving witness [are] very powerful motivators for other people to do something,” said Arleigh. “People in the congregation were saying, ‘I want to go see the doctor.'”

Barry, the man who had been told by his oncologist that he needed to accept that he was going to die, became a “face of faith” in 2017.

“It’s real simple,” said Barry. “It’s about trust, it’s about confidence, it’s about seeing people like yourself. If [doctors are] going to treat someone nice that looks like you, then you’re going to be more comfortable doing business with them.”

Scott, Rebbeck, Scharff, Lamy, and Syngal have reported no relevant financial relationships. Burns White has reported being on the board of the Northeast region of the American Cancer Society. MacKinnon did not have a conflict of interest statement on her poster. Barry and Arleigh were not asked about their conflict of interests.

This article was originally published by Medscape.com. Read the original article here.