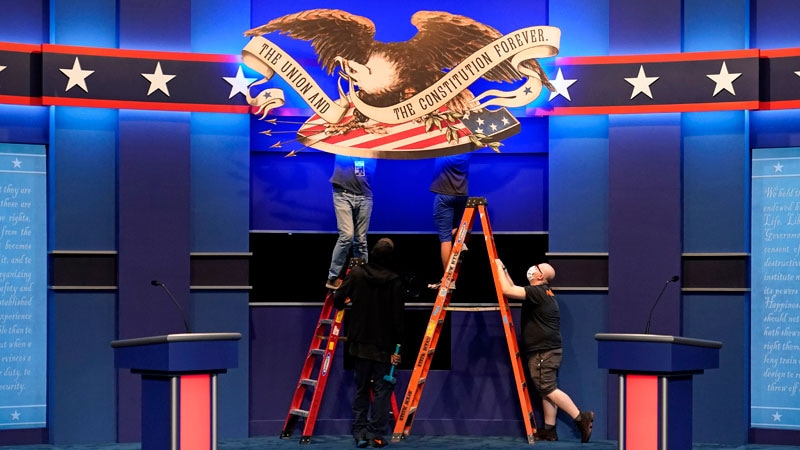 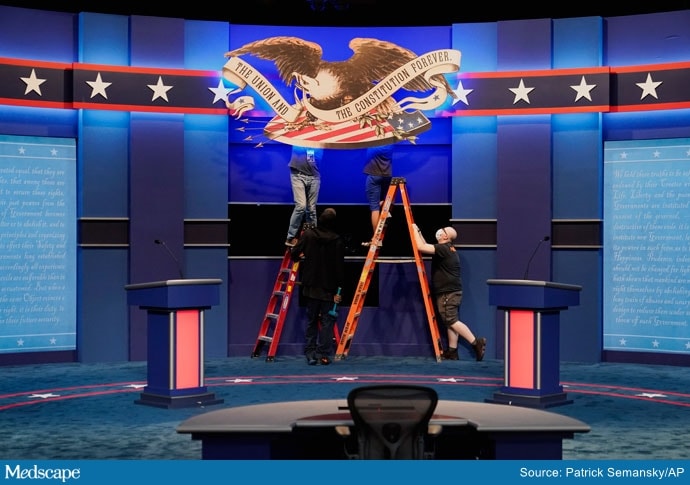 President Donald J. Trump and Democratic presidential nominee Joe Biden took the stage in Cleveland on Tuesday night in the first of three debates, talking over each other and the moderator on topics ranging from the Affordable Care Act (ACA), the coronavirus pandemic, climate change, racism, and social unrest.

The debate was held at Case Western Reserve University and Cleveland Clinic, which ensured that the debates were held in a safe manner, said moderator Chris Wallace of Fox News. The audience was limited to fewer than 100 people, and all were tested for the SARS-CoV-2 virus. The president’s family and supporters appeared largely not to wear masks during the debate but did take their seats wearing them. Biden’s wife, Jill, wore a mask while seated in the audience.

Wallace struggled to keep Trump from incessantly interrupting both himself and Biden. The former vice president also occasionally interrupted Trump.

The moderator began by asking both candidates about President Trump’s nominee for the US Supreme Court, Amy Coney Barrett. The president and GOP-led Senate is pushing for Barrett to be seated before the November 3 election. She’d potentially be able to take part in the oral arguments on the constitutionality of the ACA scheduled for November 10, and there was brief discussion about her potential impact on any vote involving Roe v Wade, but the debate never came back around to that issue.

The Trump administration is supporting the lawsuit filed to overturn the ACA by 18 Republican-led states.

“He’s in court right now trying to get rid of the Affordable Care Act,” said Biden, adding that if overturned, some 20 million people would lose their insurance. Biden said that Barrett has expressed the view that the ACA is unconstitutional.

After Barrett’s nomination, the New York Times reported that if the ACA is struck down, 21 million Americans may lose insurance, either Medicaid coverage or a policy bought on the ACA exchange.

“The bigger problem that you have is that you’re going to extinguish 180 million people with their private healthcare that they’re very happy with,” said Trump, apparently alluding to the Medicare for All program that had been proposed by other Democratic presidential candidates, but that is not endorsed by Biden or the Democratic party platform.

“What I’ve proposed is that we expand Obamacare,” Biden replied. Biden’s plan is to bolster the ACA by expanding eligibility through a public option and increasing subsidies. A Kaiser Family Foundation analysis found that expanding the subsidies would lower the cost of coverage for almost all individuals who currently buy coverage through the marketplace and for those who have been priced out, also.

But the plan will also increase federal spending, said Kaiser. Some have estimated that the Biden plan would cost $750 billion over 10 years.

“Your party wants to go Socialist,” Trump said about the Biden health plan.

When Wallace said to Trump, “you have never in these 4 years come up with a plan, a comprehensive plan to replace Obamacare,” the president responded, “I got rid of the individual mandate.”

Wallace persisted and said the president had signed a “largely symbolic order to protect pre-existing conditions,” referring to an executive order signed September 24. The same order said that if Congress did not come up with legislation to stop surprise medical bills by the end of December, the Department of Health & Human Services could take administrative action to prevent such bills.

“What is the Trump healthcare plan?” asked Wallace.

“There’s nothing symbolic,” said Trump. He said he brought down the price of drugs. He also said that with insulin, “I’m getting it for so cheap, it’s like water.”

Wallace then pivoted to COVID-19, noting that the United States leads the world with some 7 million coronavirus cases and more than 200,000 deaths, figures confirmed by the Johns Hopkins coronavirus dashboard.

Trump touted his move in the spring to block visitors from China and said that if he had not taken action, there would be 2 million, not 200,000 deaths. “Now we’re weeks away from a vaccine,” said the president.

Wallace pointed out that both the Centers for Disease Control and Prevention Director Robert Redfield, MD, and Moncef Slaoui, MD, the head of the government’s Operation Warp Speed, said it would be next summer before the vaccine would be widely available.

“I disagree with both of them,” said Trump, adding that he’d spoken to the vaccine makers and that they said a vaccine would be available sooner. “People like this would rather make it political than save lives,” he said.

The president said it was possible “we’ll have the answer by November 1,” and that the vaccine could be delivered “right away.”

“This is the same man who said by Easter this would be gone away,” said Biden.

The Democratic nominee told Wallace that he’s cautious about opening up schools and businesses because Trump “doesn’t have a plan.”

Wallace asked Trump what he thought of masks, noting that he has questioned their effectiveness. “I put a mask on when I think I need it,” said Trump. “I’m okay with masks,” he said.

“Masks make a big difference,” said Biden, noting that Redfield had said that if everybody wore a mask and continued social distancing between now and January, it would probably save up to 100,000 lives.

“No serious person said the opposite,” Biden retorted.

“Dr. Fauci said the opposite,” Trump said, insisting that the head of the National Institutes of Allergy and Infectious Diseases had changed his stance on masks.